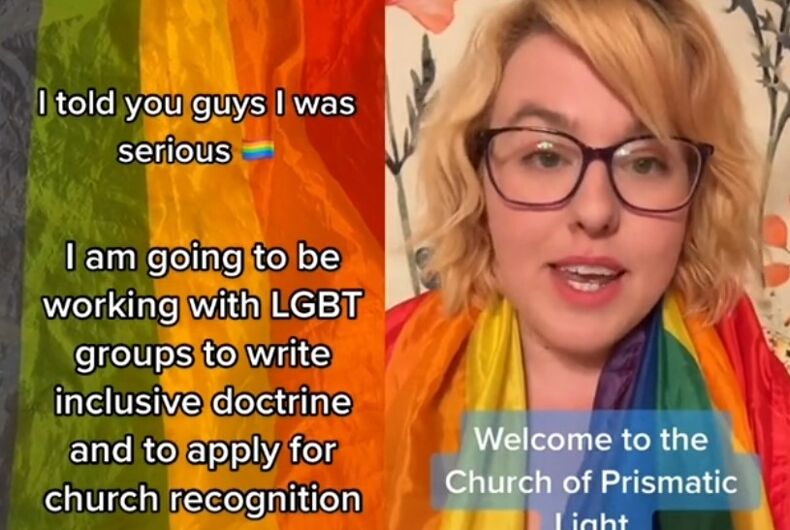 Tiffany Holloway, an Oklahoma resident who has a transgender son, founded a church as a way to oppose Republican efforts to criminalize gender-affirming medical care for trans youth.

She founded the church after her 16-year-old son told her that he’d attempt suicide if state legislators made it impossible for him to access gender-affirming care. Holloway’s son began testosterone hormone therapy four years ago which turned him into “a happy positive child” after his initial depression upon realizing his trans identity.

While parents of trans youth have fled states that criminalized gender-affirming healthcare, Halloway launched her church, The Church of Prismatic Light, to fight for the rights of trans youth and LGBTQ people who can’t leave their states, Vice News reports.

The church — which has applications for tax-exempt status pending in Oklahoma and the federal government — exists entirely online, isn’t based on Christianity, has no central deity, and has the right to medically transition among its central beliefs. It welcomes believers and non-believers of all backgrounds and also delivers weekly sermons on LGBTQ history and self-care via TikTok.

Among the church’s seven central tenets are the inherent rights to bodily autonomy, consensual love (including self-love), self-discovery, and self-presentation. Its tenets state that “All beings must act with compassion and empathy towards all living things to the best of their ability” and “It is our intrinsic duty to fight for the oppressed and to stand against our oppressors when injustice is being done.”

“Medical decisions are at the discretion of the individual and their healthcare providers alone, and shall not be infringed upon,” the church’s sixth tenet states. “This includes gender-affirming medical care and/or medical reproductive care.”

Holloway says that if the church is legally recognized by the state and federal government, then it could file lawsuits alleging that anti-LGBTQ legislation violates the group’s religious freedoms. Inverse arguments have been made by evangelical Christians who claim that LGBTQ civil rights threaten their religious liberties.

The church has proved popular. It already has over 143,000 followers on TikTok, over 7,300 Facebook followers, over 7,400 Instagram followers, over 9,900 Reddit followers, over 4,500 Twitter followers and also has a presence on Discord, where followers discuss related issues like raising queer youth, non-monogamy, and a gallery for selfies of LGBTQ individuals and their supporters.

Holloway said that the church’s wellspring of support from across the country has convinced her son not to kill himself if Oklahoma passes a ban on gender-affirming care. Numerous family members with queer relatives have also contacted her to express gratitude for providing a place where they can connect to a thriving LGBTQ community, even when they live in conservative and secluded parts of the nation.

Such laws go against the best practices of trans-related pediatrics outlined by the American Academy of Pediatrics, the American Medical Association, and the American Psychological Association. The organizations find that gender-affirming medical care is medically necessary and reduces suicide and depression among trans youth.

These laws are part of a larger nationwide push by Republicans to pass laws targeting LGBTQ youth. Other such laws have attempted to ban trans youth from playing sports or to ban any LGBTQ content from classrooms. These bills’ supporters have said that anyone who opposes the laws are pedophilic “groomers”, language which encourages violence against LGBTQ people and allies.

Recently, LGBTQ lawmakers in 19 states announced their efforts to establish their states as safe harbors for trans kids and families persecuted by laws criminalizing gender-affirming healthcare. These lawmakers will introduce legislation that explicitly protects trans youth right to access medical care, such as puberty blockers, hormone treatment and medical procedures.

Biden’s bold pledge on LGBTQ rights is being tested by Azerbaijan. What will he do?