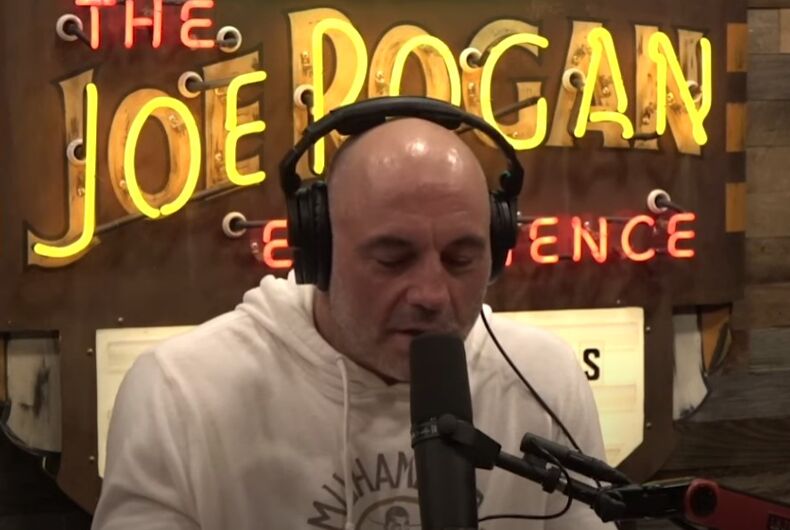 The extremely popular conservative podcaster Joe Rogan claimed on his show The Joe Rogan Experience that teachers are telling straight children that they will “burn in hell” if they’re straight in order to “indoctrinate” children into being gay.

“Imagine if you had a gay child and you have a fucking teacher that’s trying to indoctrinate your child into the world of heterosexuality, and convince your child that they’re going to burn in hell if that child is gay,” Rogan said. “Imagine how furious you would be. Well it works the other way too!”

Rogan, of course, did not provide any examples of teachers forcing kids to be gay or telling straight kids that they’re going to burn in hell because of their identities. Instead he ranted about “people with lip rings and f**king blue hair” and said, “I’m saying, you should not be the person that talks to children about” sexual orientation and gender identity.

“Imagine if you had a gay child and you have a fucking teacher that’s trying to… convince your child that they’re going to burn in hell if that child is gay. Imagine how furious you would be. Well it works the other way too!” pic.twitter.com/DKg1n9XKFC

Part of the moral panic has been fabricated stories about teachers forcibly transitioning their students, with even Florida Gov. Ron DeSantis (R) falsely claiming that a “school had decided that the daughter was really a boy and not a girl, so they changed the girl’s name to a boy’s name, had her dress like a boy and on doing all this stuff, without telling the mother or getting consent from the mother.”

While these stories are fake, they have the power to influence policy. DeSantis’s press secretary, Christina Pushaw, credited realtor and Twitter personality Chaya Raichik for “opening her eyes” to how LGBTQ teachers are “grooming” children into being queer or trans. Raichik posts videos of teachers saying they’ve come out to their students or showing pride flags in their classrooms and calls them “groomers,” or pedophiles.

Pushaw would be one of the key supporters of Florida’s Don’t Say Gay law, which she said was an “anti-grooming bill” that would stop “the grooming of four-8 year old children,” parroting the language of extreme anti-LGBTQ activists.

Rogan has a long history of pushing misinformation on his massive audience. In January, 270 scientists and healthcare workers signed an open letter to Spotify about his “false and societally harmful assertions” about the COVID-19 pandemic, which included saying that “societal leaders have ‘hypnotized’ the public.”

He has said that people who are healthy and “exercising all the time” don’t need to get vaccinated against COVID-19, had a guest on who compared pandemic measures to the Holocaust, and advocated using ivermectin – a veterinary medication used for treating parasitic infections – to treat COVID.

Several musicians – starting with Neil Young – pulled their catalogues from Spotify in protest of the app’s promotion of COVID misinformation. The Joe Rogan Experience has a $100 million contract with Spotify.

Rogan has also come under fire for racist comments. India.arie pulled her music from Spotify because of Rogan’s statements, which include using the n-word repeatedly and referring to a movie theater as “planet of the apes” because many Black people were in attendance.