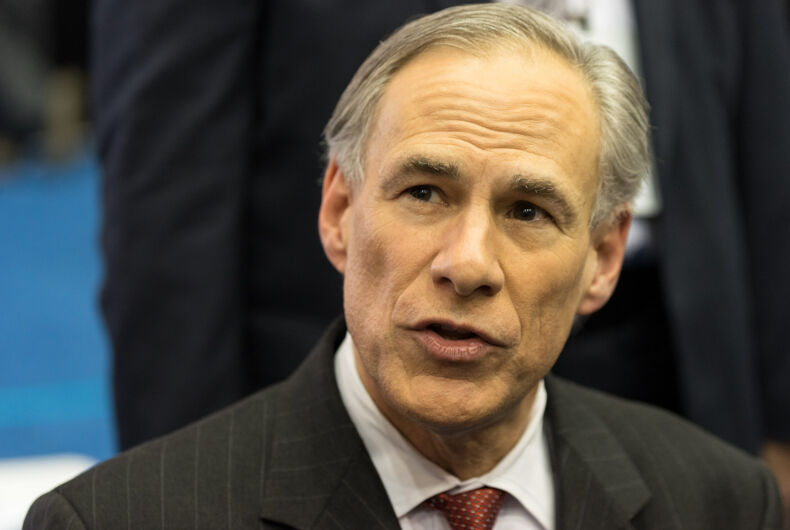 “As the lawyer who represents DFPS in civil child abuse cases in Harris County, I can tell you my office won’t be participating in this political game,” wrote Christian D. Menefee on Twitter.

Related: Florida could give teachers 6 weeks to out gay students to their parents, even if they’ll get abused

.@GovAbbott As the lawyer who represents DFPS in civil child abuse cases in Harris County, I can tell you my office won’t be participating in this political game. We’ll continue to follow the laws on the books—not @KenPaxtonTX’s politically motivated and legally wrong ‘opinion’ https://t.co/cJdaYE7uC3

In a more official statement, Menefee lambasted both Abbott and Paxton for “ignoring medical professionals and intentionally misrepresenting the law to the detriment of transgender children and their families.”

He declared that he will “continue to follow the laws on the books,” rather than their opinions, as “we owe a duty of candor to the courts about what the law really says.”

“Republican leadership of this state is trying to turn loving and supportive parents into criminals, and this office will play no part in it,” Garza told The Dallas Morning News.

Last year, the Texas legislature tried and failed to pass S.B. 1646, a bill that would have declared parents who allow their trans children to take puberty blockers or undergo hormone therapy to be child abusers.

And earlier this week, Paxton, issued a non-binding opinion stating that gender affirming health care for transgender youth is a form of child abuse, a move that could increase harassment of the families of trans children.

Citing Paxton’s opinion, Abbott’s recent order to DFPS says that it’s “clear” that “it is already against the law to subject Texas children to a wide variety of elective procedures for gender transitioning, including reassignment surgeries that can cause sterilizations, mastectomies, removals of otherwise healthy body parts, and administration of puberty-blocking drugs or supraphysiologic doses of testosterone or estrogen.”

Abbott’s order also says that “doctors, nurses, and teachers” should face “criminal penalties” if they don’t report parents to state authorities if they believe that parents are helping their children access gender affirming health care.

Daddy issues: Why Putin is being worshipped by the American right