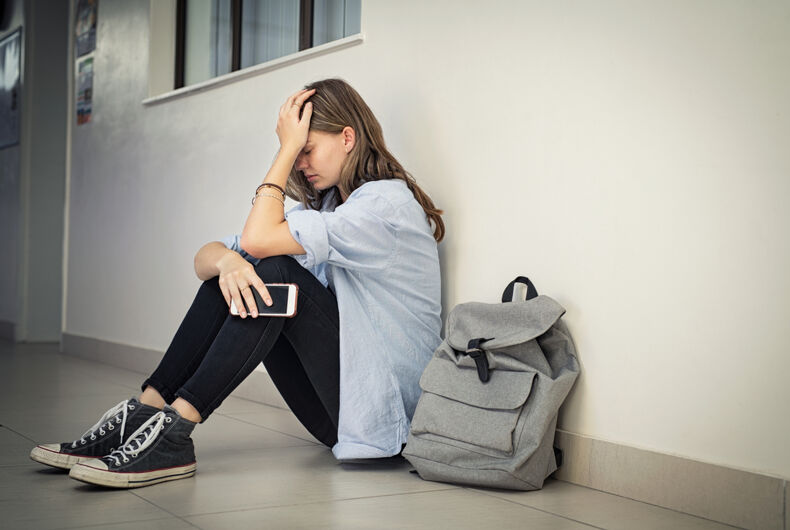 A proposed amendment for Florida’s Don’t Say Gay bill would give teachers six weeks to out gay and bisexual students to their parents if they find out that a student isn’t straight. An exemption for cases where schools believe that outing a student could lead to abuse has been removed, meaning that schools would be required to knowingly put students in danger by outing them.

State Rep. Joe Harding (R) is sponsoring the bill and he filed the amendment on Friday, February 18.

Florida’s H.B. 1557 would ban teachers from discussing LGBTQ people in class. LGBTQ advocates like Chasten Buttigieg has pointed out that LGBTQ teens are at a heightened risk of suicide and the bill would cut them off from help from their teachers

The previous version of the bill, which was approved by a house committee last month, required schools out students to their parents if they find out that they’re LGBTQ, but it had an exemption for cases if “a reasonably prudent person would believe” that outing a student would lead to “abuse abandonment, or neglect.”

While it’s hard to imagine that schools would always apply the exemption judiciously every time, Harding’s new amendment removes even that little protection, saying that schools must “develop a plan, using all available governmental resources” to out children to their parents “through an open dialogue in a safe, supportive, and judgment-free environment that respects the parent-child relationship and protects the mental, emotional, and physical well-being of the student.”

The amendment would only allow schools to use “child-specific information personally known to the school personnel” when deciding which students to not out, which means that the school is only allowed to exempt students who can prove that they have already been abused by their parents from the outing policy.

WFLA notes that the amendment currently does not say how the “mental, emotional, and physical well-being of the student” will be protected in cases where outing could lead to abuse and neglect. The channel also notes that the amendment may affect Florida’s mandatory abuse reporting law in cases where outing leads to abuse, since school officials would be legally responsible for reporting abuse that they had a hand in instigating.

State Rep. Ana Eskamani (D) filed another amendment that would allow students to sue the Florida Department of Education for damages and attorney fees if they are harmed by the mandatory outing law.

Both amendments would need a majority vote in the full Florida House to be added to H.B. 1557.

Earlier this month, out Secretary of Transportation Pete Buttigieg called out the bill, saying that it would contribute “to the shocking levels of suicidal thoughts and suicide attempts among LGBTQ youth.”

And, as a new gay dad, he also attacked the bill for banning the children of LGBTQ people from talking about their families at school.

“Chasten, my husband, pointed out that if our kids some day- some Monday morning come into class, you know, and kids are sitting around and the teacher’s got the morning circle talking about how everybody’s weekends went, and one of them says, ‘I had the best weekend with my dads,’ is the teacher supposed to say, ‘No, we don’t talk about that here’?” Buttigieg said on CNN.