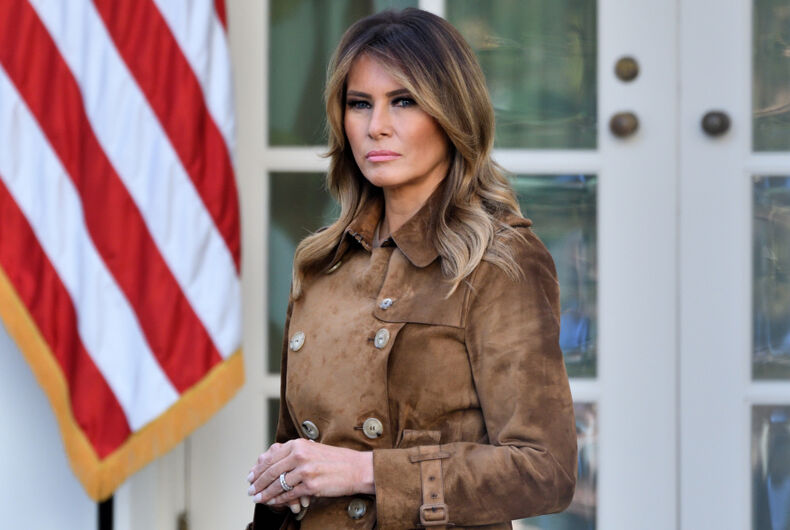 Presidential historian and author Michael Beschloss went viral in 2020 when he tweeted side-by-side before-and-after pictures of the Rose Garden to show how it changed during the Trump administration. On President Joe Biden’s Inauguration Day, attention was again focused on the White House and Beschloss went on MSNBC, where he brought up how the Trumps built a tennis pavilion near the space that “looks quite like a mausoleum.”

He said that the Trumps wanted a shot of Melania walking in the Rose Garden for the Republican National Convention, but they couldn’t get it because of the crabapple trees Jackie Kennedy Onassis had planted. So they had the trees all “yanked out… essentially for a camera shot,” as journalists on the channel laughed. On Twitter, Beschloss said that the pavilion looks like the set of The Beverly Hillbillies.

In 2020, the site served as host to a COVID super-spreader event following the confirmation of anti-LGBTQ Supreme Court Justice Amy Coney Barrett.

In 2021, he tweeted about the “evisceration of the White House Rose Garden,” earning a response from the former First Lady, who oversaw the renovation. She insisted that he “has proven his ignorance by showing a picture of the Rose Garden in its infancy. His misleading information is dishonorable & he should never be trusted as a professional historian.”

.@BeschlossDC has proven his ignorance by showing a picture of the Rose Garden in its infancy. The Rose Garden is graced with a healthy & colorful blossoming of roses. His misleading information is dishonorable & he should never be trusted as a professional historian. https://t.co/LU243SANF1 pic.twitter.com/PuVOSjxx5w

But the topic has come up again already in 2022 when someone tweeted, “Who wants to see Jackie Kennedy’s Rose Garden (destroyed by Melania) re-established on the White House grounds?”

With almost 10,000 likes and countless responses, other users were quick to jump in with their opinions – both of the remodeled garden and the Trump administration.

“She turned a beautiful garden into something that looks like a walkway in between apartment buildings,” one person moaned. “Hideous.”

“The Rose Garden should be named a national historical location,” one woman posited. “Make it a penalty to mess with.”

“I would put out a cattle call for all master gardeners to come to the White House and present plans to restore the Rose Garden better than ever,” another user said, sparking visions of Joe Biden lighting a spotlight with a big rose in the middle to summon the gardeners.

YES! She turned a beautiful garden into something that looks like a walkway in between apartment buildings. Hideous.

This is what we lost pic.twitter.com/asZSsSGXLt

Good idea. Much, much harder to mess with historic landmarks. There is this little tavern near where I used to live in Seattle. Nothing to look at BUT… it was a Pony Express outpost back in the day. They cannot alter the exterior structure. It adds so much charm.

I've always doubted that Melania had any interest in landscaping.

I would put out a cattle call for all master gardeners to come to the White House and present plans to restore the rose garden to better than ever. pic.twitter.com/ZcCpnDopUI

Yes, they were. Trees were old and needed more space, proper drainage, etc. They've been relocated. I would love to see more colors added back to the garden, though.

They don’t have to duplicate Jackie’s Rose Garden, but definitely replace what Melania put in there with something attractive and appropriate.