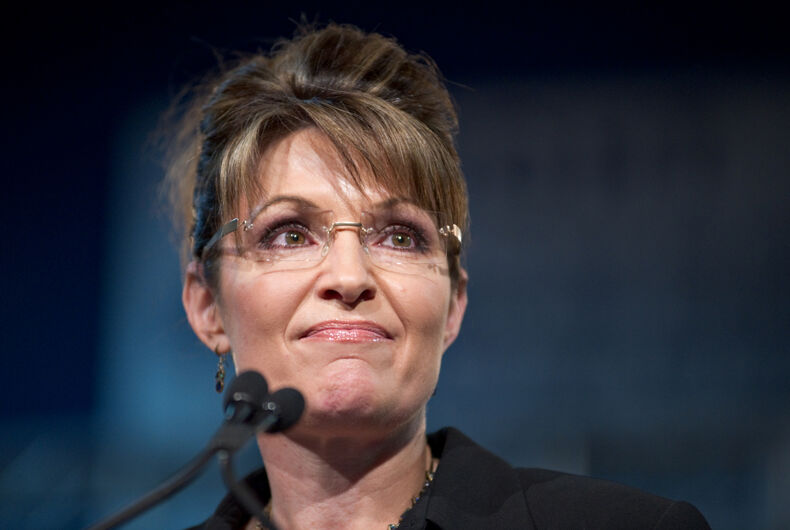 The death of Alaska Rep. Don Young last month made Alaska’s sole Congressional seat an open race for the first time in nearly half a century. Most people wouldn’t be paying attention except for the candidacy of one big name: Sarah Palin. The former vice presidential candidate decided to throw her hat in the ring and join 47 other candidates in the race for Young’s seat.

You would think that Palin’s name recognition would give her a big boost in the race, to say nothing of her endorsement by Donald Trump. You would be wrong.

As it turns out, for a lot of Alaskans, it appears that Palin’s “best by” date expired a long time ago. Between her money-grubbing celebrity antics and her less-than-stellar record as the governor of Alaska, Palin isn’t feeling a lot of love from voters as she seeks a return to elected office.

Palin has been telling voters that she has “a public servant’s heart.” If so, it’s pretty well hidden. Perhaps it got muffled under the pink and blue bear suit she wore on The Masked Singer in 2020, when she rapped “I like big butts” while attempting “Baby Got Back.”

Or maybe that’s the same heart that throbs for her new squeeze, hockey player Ron Duguay, because “he is more patriotic, more pro-America, more pro-freedom than a lot of people I know, and that includes a lot of politicians serving America.”

Whatever the reason, a lot of Alaskans are skeptical of the former governor. “I think she’s out of touch with Alaskans right now,” one local told Alaska Public Media. “Yeah, I don’t think that the people here — we don’t take her very seriously.”

Indeed, the polling for Palin is pretty bleak. While there is no polling on the race itself, there is polling on Palin’s popularity. According to Anchorage pollster Ivan Moore, last October 31 percent of Alaskans viewed Palin positively. A whopping 56 percent viewed her negatively. In a popularity contest–which is what an election is–that’s devastating.

It’s not just that Alaskans think that Palin is out of touch with the state. There’s also the way she ended her last job as a public servant. She quit two and a half years into her term, citing the high cost of ethics investigations into her and then-husband Todd’s finances. That didn’t sit well with surprised Alaskans, who wondered if she was trying to cash in on her newfound fame less than a year after her failed vice presidential campaign.

While Palin has Trump’s endorsement, the local GOP is lining up behind Nick Begich III, the nephew of former U.S. Sen. Mark Begich and grandson of former Rep. Nick Begich Sr., who preceded Young in the Congressional seat. Begich had entered the race before Young’s death and has positioned himself as a solid conservative.

Palin has enough star power to probably finish in the top four in the June 11 primary. That’s when the real race will begin. It would be especially interesting if the finalists included Alaska’s first statewide gay candidate, Christopher Constant. At least then we might get a debate on the issues as opposed to the former sage of Wasilla practicing her next rap song.

Complaint filed in Florida to ban Bible as “too woke”