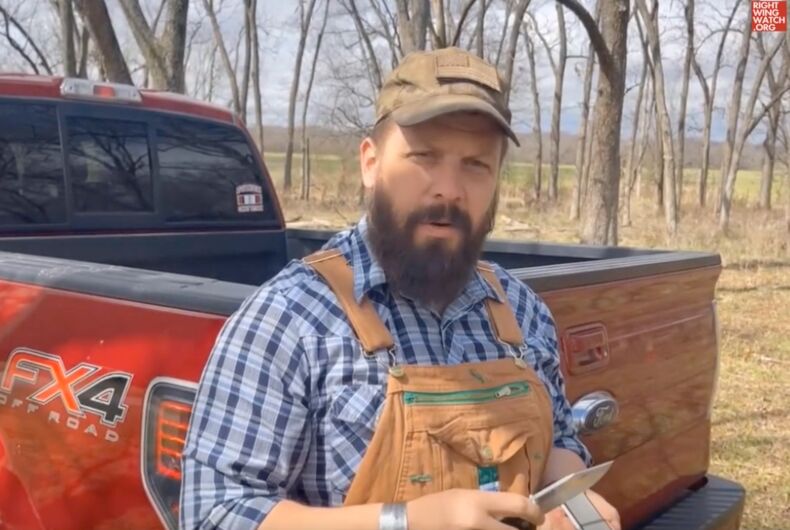 Jarrin Jackson sharpens his knife while complaining about "Godless commies" during his first campaign ad.Photo: Screenshot

Jarrin Jackson is running for the Oklahoma state senate. The far-right pastor advocates for a Christian nationalist theocracy and rails against “Godless commies” and LGBTQ people.

But his latest claim has people scratching their heads. Transgender women who have bottom surgery are “Islamicizing” their bodies.

Related: The most damaging myths about transgender kids

During his daily live stream, Jackson launched into a tirade about trans people using a Reddit post as a springboard. A user had asked for advice on how to best support their transgender daughter.

“Genesis 1 [says] God made man in his image, male and female, he created them,” Jackson told viewers. “God’s categories are good categories. God’s plan is a good plan. It’s a good order. Most of what we see today is a rejection of God’s order. Most of what we see today are people seeing what God has made and choosing to reject it and deny it and destroy it and to molest it.”

“That father, I believe, is criminally responsible for manipulating and grooming his daughter,” Jackson said of the parent who posted on Reddit. “It’s his son, by the way. It’s not a daughter. That father was criminally negligent to his son because that father has not built his worldview on truth. The son is suicidal. The son is messed up physically, chemically, emotionally, relationally, truthfully.”

This isn’t the first time that would-be voters have been subjected to Jackson’s special brand of campaigning.

His first ad declared that “we are at war with communism” and voters should “unleash” him. He regularly condemns “Godless commies,” saying he wants to “shoot them in the face.” He has advocated for military tribunals that would send the supposed communists to “burn forever in a lake of fire.”

Oklahoma has produced some of the most vociferously anti-LGBTQ Republican politicians in the nation. Gov. Kevin Stitt (R) signed a law last month that bans transgender girls from participating in school sports while surrounded by cisgender girls as a trans woman stood outside his office protesting.

Family almost killed man they thought turned their son gay. They blinded him instead.