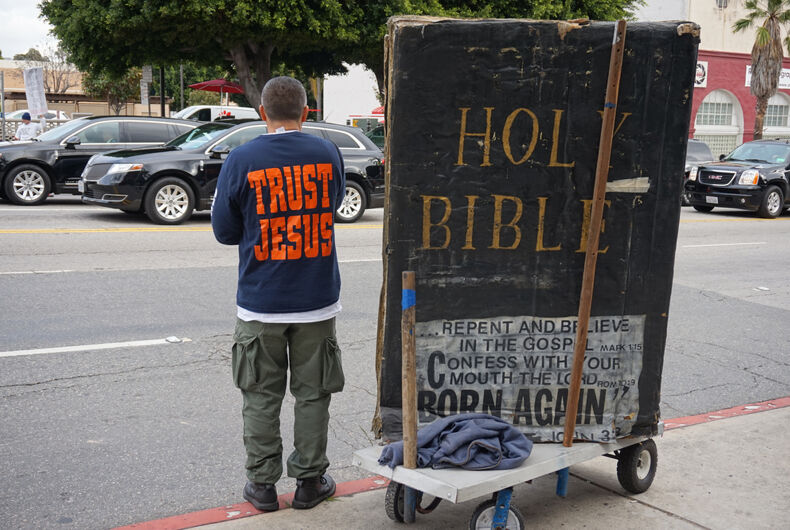 FEB 26TH, 2017: A religious protester in a "Trust Jesus" shirt stands next to a giant bible replica as limousines go by on their way to the red carpet area at the 89th Academy Awards.Photo: Shutterstock

Activist Chaz Stevens has filed a complaint with eight school districts in Florida challenging the Bible’s place in schools after Gov. Ron DeSantis (R) and GOP state legislators passed a “Stop WOKE Act” meant to keep “prohibited topics” like racism and LGBTQ issues out of the classroom.

Stevens cites examples directly from the tome to prove that the Bible is too “woke” to be available to young students.

Over 200 books have been banned in the Sunshine State so far.

Critical race theory is a body of academic work that originated in law schools in the 1970s and 1980s. Conservatives in the 2020s have started calling all discussion of racism “critical race theory,” but it’s not clear how they found it in elementary school math textbooks.

Republicans and the religious right have turned schools into the latest front in the culture wars. From laws that ban transgender children from playing school sports to restrictions on history class instruction on slavery and the Holocaust, conservatives have pushed dangerous claims using racist and homophobic stereotypes and slurs.

Stevens, an atheist, is turning the tables on Bible-beating conservatives who touted the law. Listing multiple examples of “prohibited content,” Stevens backed up his assertions with chapter and verse.

“With the constant concerns about teaching Critical Race Theory, should we not take stock of the Bible’s position on slavery? I am concerned our young white students will read such passages and wake up to civilization’s sordid past,” he wrote in his complaint.

“I wish to file such an objection, requesting the Miami-Dade County Public School system immediately remove the Bible from the classroom, library, and any instructional material,” Stevens writes in his request. “And, as is often the case with banned books, I ask your agency lay flame to that giant stack of fiction in a pyre worthy of a Viking sendoff.”

“If they’re gonna ban books, then the whole library should be in play. My hope — and it’s a longshot — is that they will apply their own standards to themselves and ban the Bible,” Stevens told the Miami New Times.