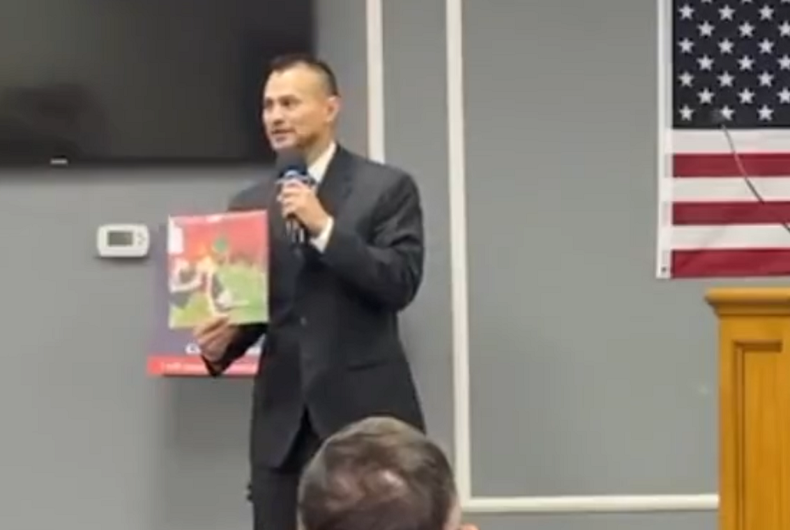 John Carlo – who is running for school board in Clark County, Nevada – was caught on video making some bizarre claims about the Constitution and LGBTQ people.

“I believe in the Constitution,” he says in a video of him speaking at a church that is being shared online. “I believe in our — our — the way our founding fathers believed in this country: life, liberty, and the pursuit of happiness.”

Related: Rep. Steve King: ‘We can’t restore our civilization with somebody else’s babies’

He held up a copy of King & King, a children’s book about a prince whose mother tries to make him find a princess to marry, but then he falls in love with another prince.

Carlo implied that this book will turn kids gay.

“That means that homosexuals cannot procreate. This goes against our Constitution and this goes against what parents want in the school district, and this is only one book out of thousands.”

Carlo made a few mistakes: the expression “life, liberty, and the pursuit of happiness” is from the Declaration of Independence, not the Constitution; gay people can have children; no legal document in the U.S. – including the Constitution – requires anyone to procreate.

But Carlo’s argument is similar to one used by Texas Attorney General Ken Paxton (R) earlier this year in a non-binding opinion that stated that supportive parents of transgender children who allow their kids to access gender-affirming care are child abusers. Paxton’s argument, entered around the idea that gender-affirming care takes away transgender people’s “constitutional right to procreate” and is therefore illegal.

Behind Carlo is a sign that directs people to a website calling for the recall of Nevada Steve Sisolak (R). The group says Sisolak needs to be recalled because of his “economic warfare” because he “elongated COVID pandemic.”

“Puppet of China,” the website states. “CDC is controlled by [the Chinese Communist Party]. His new, post-election wife is Chinese. He bows to them, not us.”

Sisolak’s wife Kathy Sisolak is Chinese American and was born in Nevada.

The website also accuses him of “pedophilia” with his own daughter, but it’s not clear why the website makes that accusation other than its general ill-will towards Sisolak.

According to RawStory, Carlo recently deleted his Instagram and Twitter accounts after his posts supporting the Confederate flag were found.

“I tell you, I’ve never been so thrilled to see a rebel flag,” he wrote on Instagram. “We fly this flag to remember Confederate history…. ani’t no one gona steer me away from my roots and tradition.” [sic]

Nevada was not a part of the Confederate States of America.