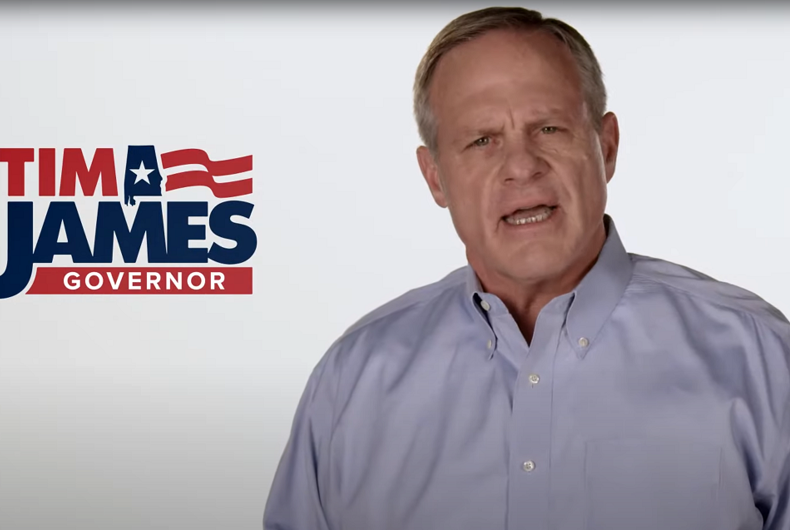 Students, administrators, and parents are furious after Republican gubernatorial candidate Tim James launched a broadside against the Magic City Acceptance Academy (MCAA) in a campaign ad. The spot showed video of a drag show held by students and showed minors’ faces.

After multiple incidents, the Alabama charter school has been forced to increase security but the much-maligned candidate isn’t backing down – even when confronted with a photo from his high school yearbook participating in the school’s longstanding tradition: football players dress in drag before the big game with their arch rival.

After his despicable campaign ad, journalists quickly started looking into James’ own schooling. His high school yearbook is available online.

The photo shows James dressed as a cowboy and participating in a skit. Half of the team is in drag; the other half are cowboys.

“This is ridiculous. This is a football team,” he said when confronted with the photo. “Yeah, that’s me in the cowboy hat, isn’t it?”

Then the ad shows pictures of students at the MCAA in Birmingham holding a drag fundraiser. MCAA is a charter school that promises an “LGBTQ-affirming learning environment” for students who “have dropped out, are not thriving at traditional schools.”

James showed a picture of students’ faces at a drag show that students put together and called the school “the first transgender public school in the South” that is costing “millions of your tax dollars.” The school says that fewer than 10% of its students are transgender, and most students aren’t LGBTQ at all.

“Enough of this foolishness,” James says in the ad. “I’m Tim James. Male and female he created them. It’s time to fight back.”

In the first week that the ad ran, someone drove by the school and shouted slurs. Later, a woman tried to enter the school to film students but was stopped by school staff.

One of the parents of a student whose image was used in the ad sent a cease and desist letter to James’s campaign. The campaign edited out just that one child but continued to use the picture in question.

In a statement, the James campaign stated that if the parent was “truly concerned about her child, she would remove her from the Magic City Acceptance Academy period.”

“The principal said that the TV ad scared the children,” the statement said. “What should scare mothers and fathers of these children is what the faculty is doing by presenting this ungodly display through the drag show to which the children were subjected.

James has previously run for the Republican nomination and lost. An ad from his failed 2010 campaign went viral for its awkward pauses and blatant racism.

LGBTQ Nation has viewed the ad in question but decided not to include it in this article because of its use of the images of minors.