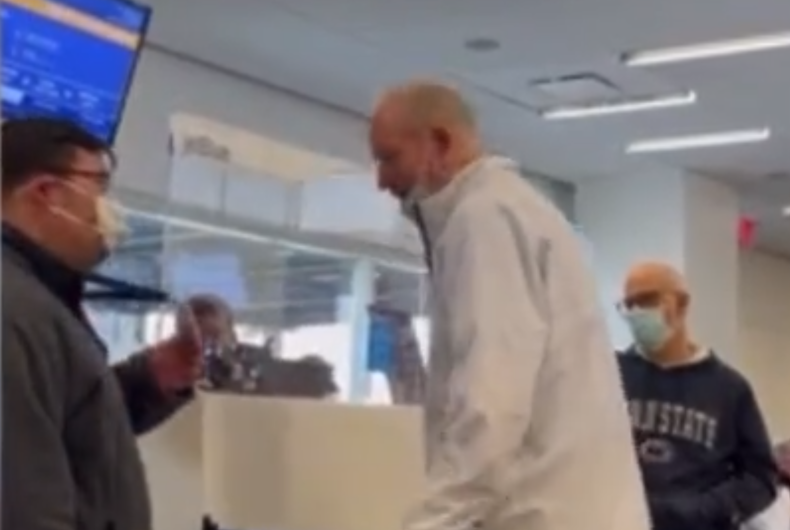 Bill O'Reilly at the airportPhoto: Screenshot

New video shows former Fox News host Bill O’Reilly having a melt-down at an airport because his flight got delayed.

In the video, O’Reilly can be heard ranting at JetBlue employees at JFK International Airport in New York City after finding out that his flight to Turks & Caicos was delayed several hours.

While it’s not possible to hear the entire conversation, O’Reilly clearly calls the JetBlue employee a “f**king scumbag.”

“You’re threatening me with violence, man,” the employee responds.

Another passenger was recording O’Reilly and he sent the video to The Daily Mail.

“I couldn’t believe how arrogant he was,” the passenger said. “That poor JetBlue guy just works there, it’s not his fault the flight was delayed, he was just trying to do his job.”

O’Reilly has a long history of anti-LGBTQ comments. In the 2000’s, he repeatedly attacked former out Rep. Barney Frank (D-MA), including laughing at the idea that Frank “might want to be arrested,” a joke about sexual assault in prison.

In 2012, O’Reilly was part of a Fox panel discussing how the show Glee turns kids gay: “When I was a teenager and I saw James Dean smoking, it made me want to smoke…. A lot of these dopey kids are confused about who they are. They’re confused.”

He also attacked Caitlyn Jenner’s identity: “So this loon wants to fine us if we misgender-ize — which, I don’t even know what that means!… Pardon me for saying this, but from the waist down, he is a ‘he.’ According to ‘she.’”