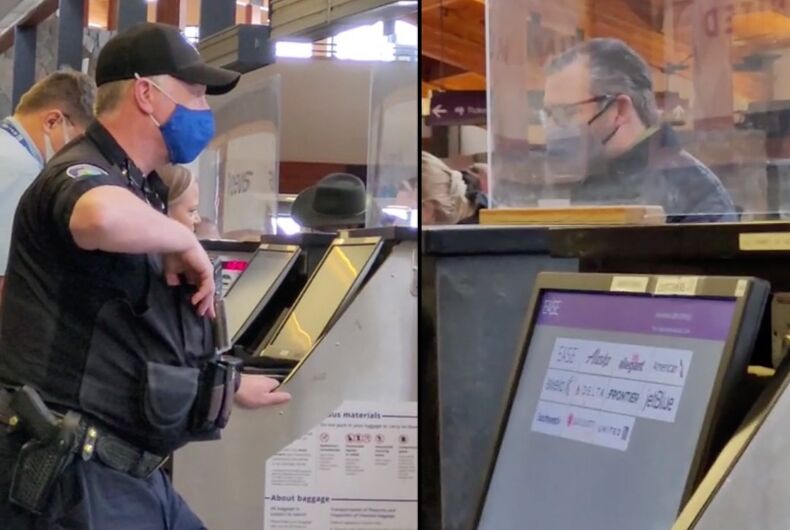 Sen. Ted Cruz (R-TX) faced off with security at a Montana airport.Photo: Screenshot/composite

Sen. Ted Cruz (R-TX) doesn’t have the best luck at airports. First, he was busted jetting off to Cancun in the middle of a deadly cold snap in his state – and then photographed slinking back into the country after his callousness made national news.

Now he’s been filmed having a meltdown at a Montana airport and facing off with security while tossing out a version of “Don’t you know who I am?!”

The guard has said he didn’t realize that it was Cruz behind the “Come and take it” face mask throwing a Karen fit at Bozeman Yellowstone International Airport. To him, it was just another jerk harassing two overworked and stressed-out female employees at the check-in counter.

In a video originally posted on Reddit, Cruz is shown facing off with two women after he was denied entry to his flight after he checked in too late. Mistakes happen, but Cruz lost his temper when he was told that flights out of the small airport were limited due to Spring Break.

The grumpy senator was eventually able to depart on a later flight. Despite the GOP jerk’s hissy fit, the airline was able to accommodate him just like they do every other passenger.

“One of our Public Safety Officers (PSO) was in the ticket lobby and was asked to assist with a frustrated passenger at the United ticket counter (which is not unusual). The passenger had missed the check-in window for his flight and re-booking options were limited out of Bozeman due to Spring Break,” airport deputy director Scott Humphrey said. “Once travel options were explained to the passenger, he was rebooked and departed Bozeman later that evening. Our PSO didn’t realize he was dealing with Senator Cruz until after the fact.”

Cruz was in a rush to get back to Washington, DC for Ketanji Brown Jackson’s Supreme Court confirmation hearings. Cruz lamented that the hearings had become “angry and confrontational” during his opening statement.

After media coverage of his quick Cancun vacation, Cruz complained the press had been too vicious in how it was presented to viewers.

“Here’s a suggestion. Just don’t be assholes. Just, you know, treat each other as human beings, have to some degree some modicum of respect.”

So @TedCruz was apparently so out-of-control abusive to airline staff at the airport in Bozeman, Montana, that law enforcement had to get involved.

Ever been to the gay rodeo?