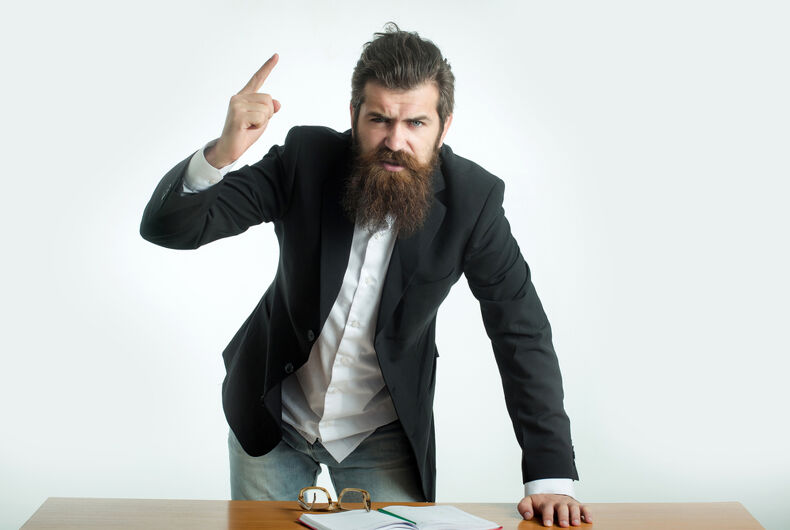 A professor in Ohio sued because his employer tried to stop him from misgendering a trans student, and he just won $400,000 in a settlement.

Shawnee State University professor Nicholas Meriwether misgendered a trans woman in one of his classes in 2018, violating the university’s policies. The student asked to be referred to with she/her pronouns, and he started debating gender identity with her.

The student filed a complaint with the school, which started a Title IX investigation against the professor, since harassing LGBTQ students can be considered a violation of their right to an education free from discrimination on the basis of sex. The investigation concluded that Meriwether created a “hostile environment” and was issued an informal warning.

As a compromise, he said that he would refer to the student with her last name only, but then started calling her “Mr.” He got another written warning.

“I am a Christian. As such, it is my sincerely held religious belief, based on the Bible’s teachings, that God created human beings as either male or female, that this gender is fixed in each person from the moment of conception, and that it cannot be changed,” he wrote in response.

Meriwether sued the university with help from the anti-LGBTQ hate group Alliance Defending Freedom. Initially, his lawsuit was thrown out of court, but he appealed and three-judge panel with two Trump-appointed judges ruled that the school’s policies violated Meriwether’s free speech rights.

As Slate‘s Mark Joseph Stern noted at the time, the judges’ logic implies that “professors have a constitutional right to use racial epithets in class, to use misogynistic language in front of students, to express all manner of odious views in a maximally offensive manner. They would not have to worry about creating a hostile environment in violation of civil rights law.”

“If disciplined, they could simply assert their First Amendment rights to speak about a ‘matter of public concern’ however they please. (With one exception: Presumably, any speech critical of religion would remain off-limits, since such expression apparently violates others’ religious liberty.)”

Now the university has agreed to pay $400,000 to the professor to settle the suit.

“Though we have decided to settle, we adamantly deny that anyone at Shawnee State deprived Dr. Meriwether of his free speech rights or his rights to freely exercise his religion,” the school said in a statement.

“We continue to stand behind a student’s right to a discrimination-free learning environment as well as the rights of faculty, visitors, students and employees to freely express their ideas and beliefs.”