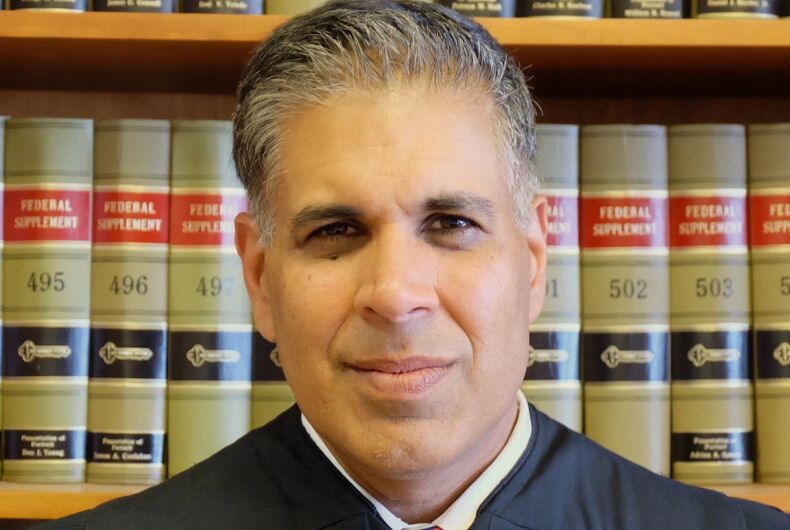 Federal Appeals Court judge Amal Thapar has penned a stunning decision that declares a college professor has a First Amendment right to insult and degrade transgender students in class. The ruling allows the professor to sue the university for discrimination.

Nicholas Meriwether, a philosophy professor at Shawnee State University in Ohio, refused to refer to a transgender woman using female pronouns, claiming it violated his religious beliefs. The school is a public university and not religiously affiliated.

A panel of conservative judges made the decision, including Joan Larsen, a Trump appointee, and David McKeague, who was appointed by George W. Bush. A previous judge had dismissed Meriwether’s complaint, but this decision gives him the right to sue.

“If professors lacked free-speech protections when teaching, a university would wield alarming power to compel ideological conformity,” Thapar wrote in the decision, claiming it could compel “a civil rights icon to condemn the Freedom Riders.”

The over-the-top opinion also compared the nondiscrimination policy to the McCarthy era efforts “to eliminate ‘subversive persons’ among government personnel.”

In Meriwether’s complaint, he said he refers to students with “sir,” “ma’am,” “mister,” or “miss.”

After a class in January, a student approached him and told him that she uses “she” pronouns. Meriwether said he couldn’t do that and debated gender identity with her. He said he would refer to her only by her last name, and she filed a complaint with the university.

Shawnee State has a nondiscrimination policy that includes gender identity. Meriwether got an informal warning.

“I am afraid my answer is the same that it has always been: Every student needs to be treated the same in all of your classes,” responded Roberta Milliken, acting dean at the time, when he asked about the school’s policy on pronouns.

The student filed another complaint later when Meriwether addressed her with a “Mister.” He claims it was an accident. After a Title IX investigation, he got a written warning for violating Shawnee State’s nondiscrimination policy.

In a grievance process, Meriwether said that his religious freedom was violated.

“I am a Christian. As such, it is my sincerely held religious belief, based on the Bible’s teachings, that God created human beings as either male or female, that this gender is fixed in each person from the moment of conception, and that it cannot be changed,” Meriwether wrote.

He offered some alternative solutions, like putting a disclaimer on the syllabus saying that he was using the correct pronouns to address people “under compulsion.” The school rejected the alternatives as well as his grievance.

“It was inevitable that a Trump judge like Thapar would undercut transgender rights,” Mark Joseph Stern writes in a legal analysis for Slate. “But the logic of Meriwether v. Hartop does not stop with preferred pronouns. Under Thapar’s reasoning, professors have a constitutional right to use racial epithets in class, to use misogynistic language in front of students, to express all manner of odious views in a maximally offensive manner. They would not have to worry about creating a hostile environment in violation of civil rights law.”

“If disciplined, they could simply assert their First Amendment rights to speak about a ‘matter of public concern’ however they please. (With one exception: Presumably, any speech critical of religion would remain off-limits, since such expression apparently violates others’ religious liberty.)”

Meriweather is represented by the Alliance Defending Freedom (ADF). ADF is a hate group that has been behind many recent lawsuits for religious exemptions, including Masterpiece Cakeshop and Hobby Lobby.