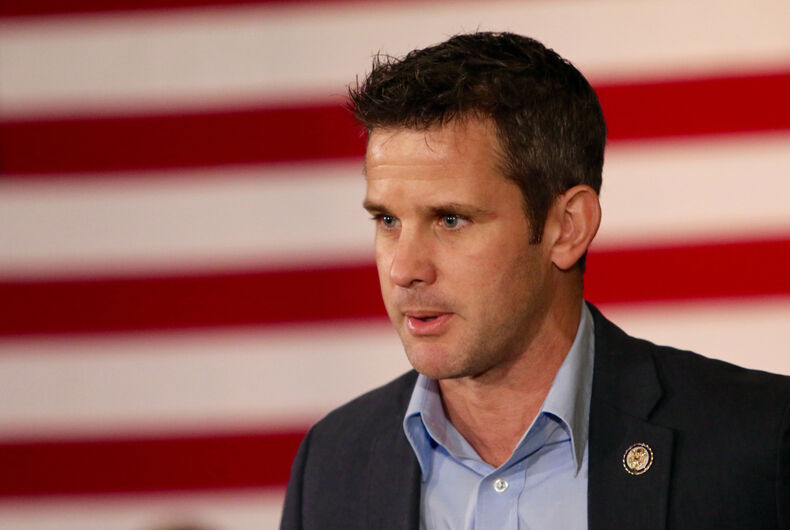 We’re still more than seven months away from this year’s elections, but the field is already shaping up for the 2024 Republican presidential election. Of course, the big orange elephant in the room is Donald Trump, who keeps hinting broadly that he wants to run again. A number of other candidates, like former South Carolina governor Nikki Haley, would no doubt love to run, but if Trump is in, only Florida Gov. Ron DeSantis is likely nervy enough to challenge the favorite of seven out of ten Republican voters.

Still, a lot of big egos are hedging their bets about Trump’s intentions and building their own campaign structures.  Mike Pence just released his “Freedom Agenda,” his thinly veiled 2024 campaign platform. Pence is striking all the Trumpist chords in his own milquetoast way. The former VP calls for “patriotic” education and, in a shout-out to the transphobia that now animates the GOP, “protecting female athletic competition.”

Related: Someone needs to sue Florida to stop the Berenstain Bears’ sexual indoctrination of children

Pence doesn’t have a snowball’s chance in hell of winning the Republican nomination for president. Pence keeps talking about how Republicans need to look to the future, and a lot of voters may actually agree with him. That doesn’t mean that they will forgive him for not participating in Trump’s coup attempt.

But if Pence is a long shot at best, consider the anti-Trumpers who are considering a run for the nomination. Already facing political wilderness within their party for refusing to paper over Trump’s effort to overthrow the election, such figures as Rep. Liz Cheney, Rep. Adam Kinzinger and Maryland Gov. Larry Hogan are all having their names thrown about as potential candidates for the 2024 nomination.

Hogan is planning trips to Iowa and New Hampshire, the earliest states to hold contests. Kinzinger apparently has a timeline for a candidacy, while Cheney’s supporters are talking up her potential as a nominee.

Unlike Pence, the anti-Trump Republicans aren’t delusional about their prospects. They see the race more as a chance to remind the party of the dangers of Trump and Trumpism.

“It’s there as an option, but it’s not necessarily because this is all some big plan so I can be in the White House,” Kinzinger told The Associated Press. “It’s looking and saying, ‘Is there going to be a voice out there that can represent from that megaphone the importance of defending this country and democracy and what America is about?’ There certainly, I’m sure within the next year or so, will be a point at which you have to make a decision.”

Moreover, it’s not as if each of the anti-Trump candidates will be competing against each other. It appears as if they intend to present a united front.

“If it’s not me doing anything, certainly we’ll be all in for whoever can represent us,” Kinzinger said.

All three potential candidates could well have plenty of time on their hands for a presidential campaign. Hogan is term-limited and cannot run for re-election this year. Kinzinger has announced he won’t run for re-election. Cheney is running for re-election, but the entire party has pretty much lined up against her for her apostasy in telling the truth about Trump and daring to serve on the House committee investigating the January 6 insurrection.

There is also one other possible candidate: Will Hurd, a former three-term Congressman from Texas. For a while, Hurd was the only Black Republican in the House. He was also one of the few Republicans supporting LGBTQ rights.

Hurd, who decided not to run for re-election in 2020, has a new book out, American Reboot, in which he calls for the country to turn away from harsh partisanship. While he’s not a fan of progressive Democrats, Hurd saves his harshest criticism for his own party. The book’s third chapter, an open letter to the GOP, is titled “Don’t Be an Asshole, Racist, Misogynist, or Homophobe.”

In an interview with The Atlantic, Hurd flirts with the idea of a presidential run. Confronted with the reality that the primaries are controlled by the hard-core base that is driving the very extremism he condemns, Hurd offers a novel solution.

That’s a nice thought. It hasn’t quite worked out that way. If anything, the trend in the GOP over the past several cycles is that fewer normal people turn out to vote. That’s why we get candidates like Trump, as well as candidates like Rick Santorum, Newt Gingrich, and Ron Paul, none of whom would live up to the third chapter of Hurd’s book.

The next Republican presidential nominee is going to be either Trump or someone very much like him. Still, the party needs to be reminded that there are still voices within it decrying its descent into authoritarianism. The question is how much longer will the party put with the dissent in its own ranks.

This Week on LGBTQ Twitter: Trans people get visible & hype the trans agenda