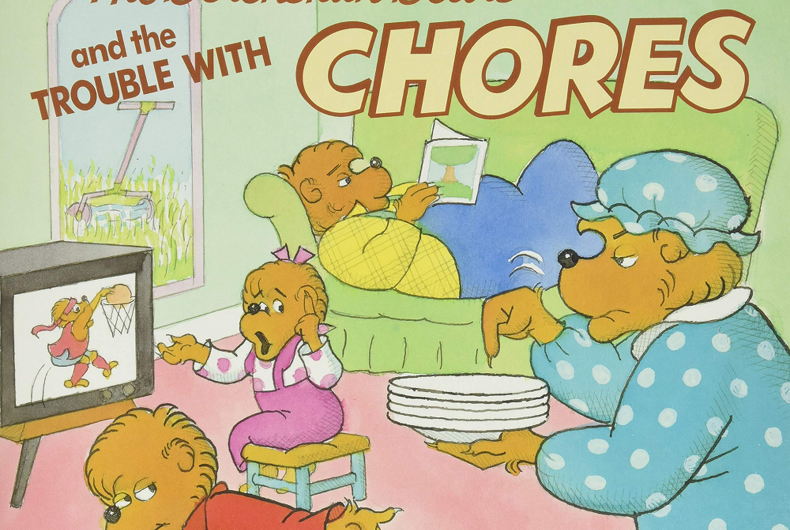 Now that Florida has finally passed a law outlawing the sexual indoctrination of elementary school students, it’s time to clean schools up. Teaching elementary school children about anything remotely sexual is done. Schools should focus on reading, writing, and mathing instead.

So someone in Florida really needs to sue their school district for making kids read the Berenstain Bears because, when you think about it, isn’t that exactly what grooming is?

For those who don’t keep with the latest trends, the Berenstain Bears is a series of over 300 books that have targeted children since 1962. The books are about two bears who are shamelessly in a sexual relationship, showing off the children produced by their sexual intercourse.

One thing that I’ve learned online these past few months is that if kids see a couple that’s in a relationship, they immediately think about them having sex. That’s the case for gay penguins, and it’s the same for straight bears.

Mama Bear and and Papa Bear – both literally named for their past sexual acts – are always presented as a married couple in the books, cohabiting and having sexual congress in a big treehouse down a sunny dirt road deep in Bear County, and we all know what married couples do.

It’s not long after they read these books that children will do the worst thing they can possibly do: ask questions.

And children will ask: where did Brother Bear and Sister Bear and Honey Bear come from?

Kids might also ask: Why does Mama Bear stay with Papa Bear even though he doesn’t do his fair share of the parenting? Because that’s what these books teach: men work outside the home, have hobbies, and are bumbling dads at home, while women quilt, garden, and handle chores like cooking and cleaning.

That’s indoctrinating children on lifestyle choices. If anyone is going to indoctrinate children, it should be their parents so that kids never learn that their parents – like all people – have limited experiences and knowledge.

Last, we all know that kids just do whatever they see their heroes do on TV, in movies, or in books. That’s just how kids are: if they see anything at all, they just automatically do it.

And since no one has ever read a Berenstain Bears book without thinking about Papa Bear’s and Mama Bear’s sex lives, that means that kids are going to start having sex if they read one of these books.

So now’s our chance to stop this outrage. A family in Florida needs to sue to keep them out of their children’s school.

The Berenstain Bears need to be kept away from our children, and anyone who disagrees is a pedophile.