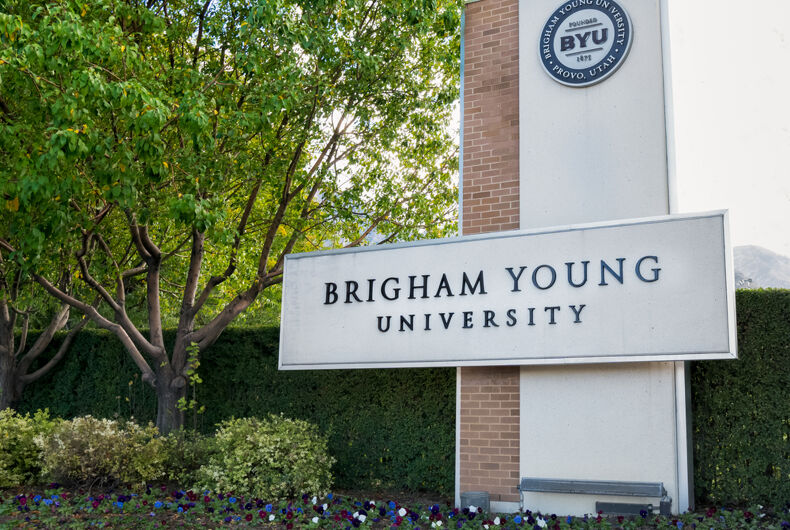 A recent graduate of Brigham Young University protested the Mormon school’s anti-LGBTQ policies by wearing a rainbow gown to her graduation ceremony.

Jillian Orr, a bisexual psychology student, sewed a rainbow flag into the interior of her black graduation gown and flashed its colors on the ceremony’s big-screen camera for all the attendees to see.

“I didn’t flaunt it in front of the faculty. My goal was just to be seen by everyone and… to make a stand and to make a statement, a civil way to protest,” Orr told The Huffington Post.

In an Instagram post she made about her gown, she wrote, “It’s hard being gay at BYU. I didn’t know I identified as bisexual until halfway through and it’s scary to live with the fear that any moment they could take away your degree. You can’t be in a relationship unless you’re hetero and most of my classes spoke of the ‘evil’ that I was born into.”

Orr said that when she first started attending BYU, she believed the Mormon church’s anti-gay teachings and felt a lot of shame about her sexuality. She began to challenge that thinking once she fell in love.

“I couldn’t live an authentic life for years, and that was so suffocating and heartbreaking because I felt like I couldn’t be myself,” she said. “I couldn’t share the person who made me happiest because my degree that I worked so hard for was on the line.”

She also couldn’t just transfer schools because she said that BYU’s numerous required religious course credits wouldn’t transfer to other schools and would force her to stay in school for an additional year or more.

By the end of her time at BYU, she couldn’t wait to graduate so she could feel liberated and able to live authentically.

“[On my graduation day] I took a chance and sent a message to other students – you can make it too! Be authentic, brave, and unapologetically you!” she wrote via Facebook.

BYU has a long history of supporting ex-gay therapy and anti-LGBTQ scholarship. In 2011, the school’s Honor Code included a prohibition on homosexual advocacy, defined as “seeking to influence others to engage in homosexual behavior or promoting homosexual relations as being morally acceptable.” The prohibition sounds similar to Russia’s law forbidding all “homosexual propaganda.” The school also recently threatened to arrest any students who protest the school’s anti-LGBTQ policies

Though the school’s policies don’t explicitly mention transgender students, by 2017, faculty members had been advised that any women with shaved heads or men wearing makeup should be reported for violating the Honor Code. The school removed its official ban on “homosexual behavior” from its Honor Code in early 2020 but the school maintains its same-sex dating ban. In January, the U.S. Department of Education opened a civil rights investigation into BYU’s disciplinary measures against LGBTQ students.

Heterophobia: Is it real?