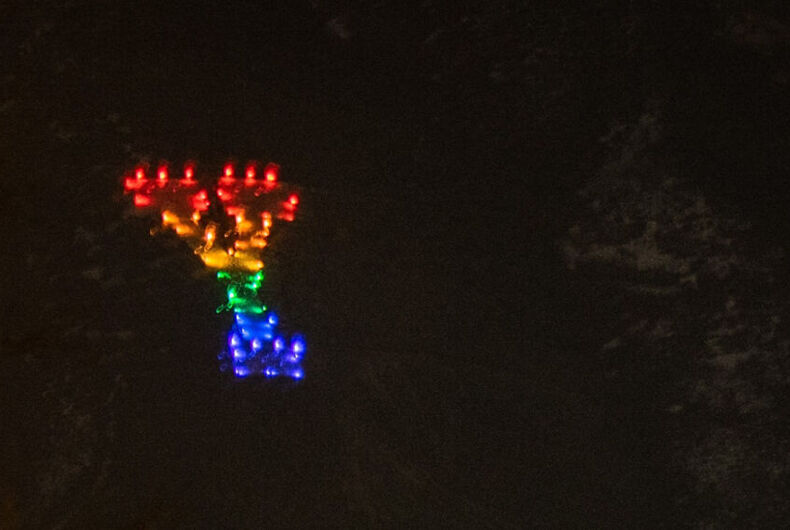 In fact, the school has threatened to discipline or arrest any students who protest against the school’s anti-LGBTQ teachings.

BYU quietly passed the rules in December 2021 while updating its demonstration policy. The new rules prohibit student protests on the hillside of Y Mountain, where the “Y” sign resides.

A BYU spokesperson told the Salt Lake Tribune that the rules were changed to ensure student safety. However, BYU President Kevin Worthen has previously said that the university looked forward “to sharing Y Mountain with our neighbors, friends and visitors.” Others have said that the university hosts hiking excursions up to the “Y” each year for homecoming, earning skepticism for its “safety” claim.

In March 2021, 40 students and allies temporarily lit up BYU’s 380-foot tall “Y” in rainbow colors using 76 colored flashlights. The action caused no property damage but was visible across the city. Numerous images of it were shared on social media.

The display commemorated the “Honor Code betrayal” of 2020 — a period when BYU removed the section from its Honor Code banning “all forms of physical intimacy that give expression to homosexual feelings.” Many students thought the section’s removal meant that the school no longer opposed same-sex relationships. A month later, the university said that wasn’t the case.

Bradley Talbot, a student who organized the action to light up the Y, said he didn’t consider it a “protest,” but more of a “symbol or a message.” He called BYU’s new protest rule change, “a scare tactic.”

“But I’m not intimidated by it,” he said. “BYU has always been more afraid of me than I have of them, and I think this is further evidence of that.”

After Talbot’s group lit up the Y in rainbow colors, BYU quickly denounced the display and said it violated their policies. No students were disciplined for taking part.

The university’s new rules define a demonstration as “an event that occurs on university property that is not sponsored by the university in which two or more people gather to raise awareness about, or express a viewpoint on, an issue or cause.” This includes “marches, memorials, parades, picketing, leafletting, signature-gathering, rallies, sit-ins and counterdemonstrations,” the Tribune noted.

The new rules also say that student protests may not “contradict or oppose church doctrine or policy”, nor are they allowed to “deliberately attack or deride” the church or its leaders.

Some students and faculty worry the rules are merely a way to silence any protest of which BYU disapproves. Meanwhile, gay BYU student Cal Burke said, “professors openly harass minority students [and] racism and threats of violence from right-wing members run rampant on campus.”