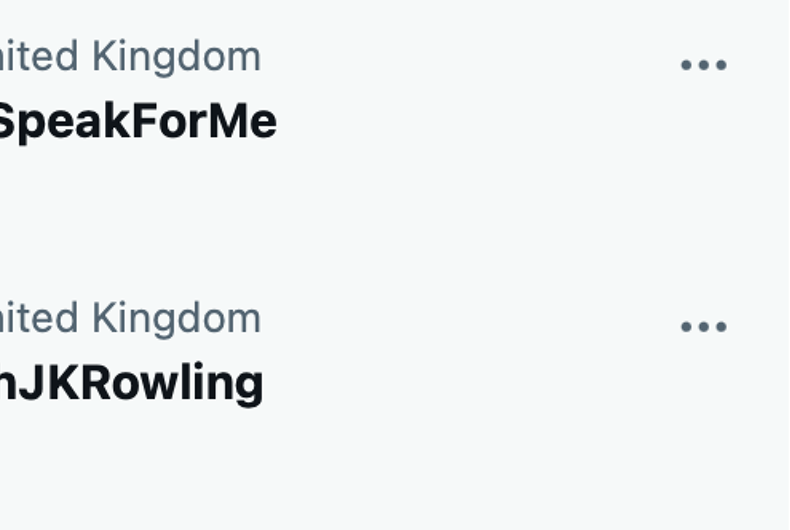 Florida Rep. Carlos Smith doubled down on the gay by recognizing his husband in the chamber while House democrats screamed “GAY” from the back rows.

Proud to recognize my GAY husband @JerickFL on the House floor in front of same chamber which passed #DontSayGay days earlier.

Watch the back rows (aka @FLHouseDems) all screaming ‘GAY’ in defiance! 🤣

No, I couldn’t resist.

Cisgender queer folks spoke out against J.K. Rowling’s attempt to claim they supported her transphobic views with the hashtag #JKDoesntSpeakForMe.

You do not speak for me and literally all of my LGBTQ+ friends and family. Get our lives out of your vile tweets #JKDoesntSpeakForMe pic.twitter.com/WVRNgsn900

The hashtag saw so much engagement that it overwhelmed the competing #IStandWithJKRowling.

Love to see it and its at 26.6k now #JKDoesntSpeakForMe pic.twitter.com/h5WL40ta8w

California Gov. Gavin Newsom threw shade at Florida and invited Disney to bring its jobs to a state that better aligns with the values of its workers.

Disney, the door is open to bring those jobs back to California – the state that actually represents the values of your workers. https://t.co/kbCi7Zgs90

Texas Attorney General Ken Paxton made a transphobic post about Assistant Secretary for Health Admiral Rachel Levine that got flagged, but not removed, by Twitter for “hateful content.”

And while LGBTQ Twitter would love to see less of Paxton’s transphobia, they would like to know more about what’s going on with lesbian WNBA star Brittney Griner, who is currently detained in Russia.

Brittney Griner is still being held wtf are we doing about it????? There is an American citizen being held captive in Russia WHY ISN’T THIS IN THE NEWS EVERY DAY? (That’s rhetorical – I KNOW why)
What is the GD plan

While some are outraged by what they perceive as a lack of coverage, others wonder if keeping the story lower profile is better for Griner’s case.

I’m not sure of the U.S. State Department’s strategy regarding Brittney Griner’s release.

And I want to be careful to align with her wife & family’s desires.

I do want to express my concern for Brittney & my prayers that she is soon released & reunited with her loved ones.

Regardless of whether the press is good or bad for Griner, it’s clear that her experience is shaped by her identity as a Black queer woman.

We cannot ignore the fact that if Brittney Griner wasn’t a Black woman, it would be plastered across the news that she is being held as a political prisoner in Russia.

With the death of Rep. Don Young, Alaska’s lone Congressional seat is open. A gay Democrat wants it.

Varoš: The tiny Croatian neighborhood that taught me a big lesson