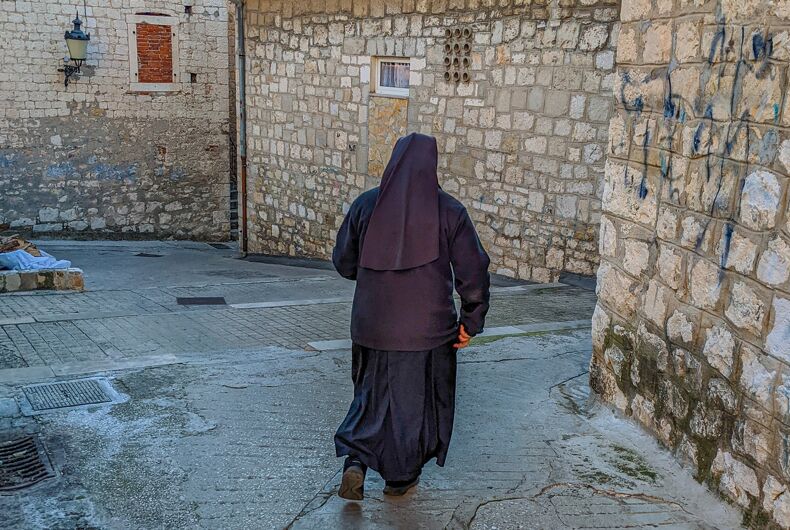 You never know what you'll find when you follow a nun down a narrow street.Photo: Michael Jensen

Brent and I are “slomads” — digital nomads who practice “slow travel.” We stay in most of our destinations anywhere from one to three months. And because of that, I get to know the places we stay a bit more deeply than I might otherwise.

But life has a way of humbling you.

Related: Why “f*g hag” fizzled out & why it should stay that way

In our current home of Split, Croatia, I was recently whining to a fellow nomad how after two months, I was bored. “Split is so small, and I’ve seen everything there is to see!” I said.

“Can I see some of your pictures?” she asked.

“Of course,” I said, always happy to show off my photos. 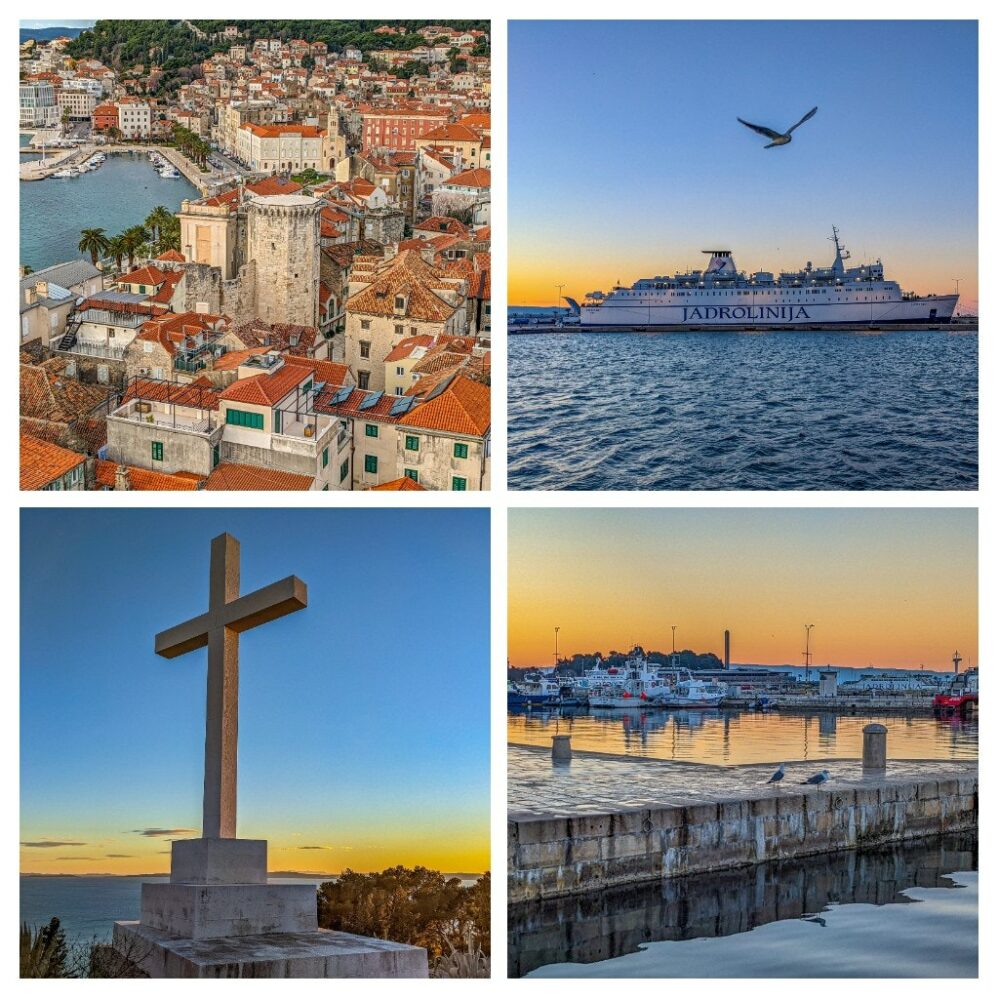 I could tell by big, she meant obvious.

“Is there something I missed?” I asked.

“Have you seen Varoš?”

“It’s a neighborhood,” she explained. “It’s not especially famous, but I still think it’s very special. And I’m surprised you’ve missed it since you practically live right on top of it.”

“I guess I need to check it out,” I said, feeling chagrined.

After she left, I did a Google search and found that, sure enough, Brent and I did live right near Varoš. I’d walked right by the entrance to this ancient neighborhood every single day.

The following morning, camera in hand, I took it upon myself to explore the neighborhood — which dates back to at least the 15th century, when it was first officially mentioned in religious records.

I quickly discovered that while this neighborhood of tiny, twisty streets didn’t contain any obvious wonders — like the 3,500-year-old sphinxes in nearby Diocletian’s Palace or the sweeping vistas from the top of Marjan Hill — it definitely had its own charms.

And maybe little wonders. You just had to look a bit more closely to see them.

Just how narrow are the labyrinthine streets? In some places, it’s possible to stick out your arms and touch either side.

Naturally, there are no cars — although there are specially designed one-person garbage trucks able to make their rounds picking up trash.

Wandering through the neighborhood, I couldn’t help but marvel at the tiny stone houses. Brent and I had spent much of the past four years in Europe — famous for its small dwellings.

But nothing quite matched what I was finding in Varoš.

Determined to not repeat my past mistake of missing the forest for the trees, I explored Varoš slowly, paying close attention to my surroundings.

And sure enough, I immediately began noticing things.

Like this Santa Claus perched up on the wall long after Christmas.

Or this cat keeping watch on passers-by.

I’d read that despite its small size, Varoš was home to several churches, including the Church of St. Nikola (Mikule), which historians believe was first built in 1056 CE.

But Varoš is a warren of dead-ends where narrow lanes end in courtyards or abandoned buildings.

Try as I might, I couldn’t find the church. Then I spotted a nun. Nun = church, right?

And, before long, she led me right to the Church of St. Nikola!

Though — ironically — it wasn’t her destination, and she kept walking right on by.

Unfortunately, the door to the church was solidly locked.

But so early in the morning, I had the area to myself and could snap pictures to my heart’s content.

Varoš grew up around the Church of St. Nikola, a neighborhood of poor fishermen, farmers, and peasants who built small stone houses for their families.

The neighborhood used to be considerably bigger, but much of it was razed in the 17th century to build ramparts to defend against invasion by Turks from the powerful Ottoman Empire.

That made me wonder what those long-ago vanished streets had looked like.

During the 18th, 19th, and 20th centuries, Varos steadily declined. Many residents departed for “better” neighborhoods, leaving behind empty buildings that slowly fell into disrepair.

Those who stayed struggled to maintain their homes, much less modernize them.

But ten years ago, things started to change again. Varoš was rediscovered by wealthy Croats — and even more wealthy Europeans from other countries.

They started buying and repairing the dilapidated structures, turning them into modern apartments and boutique hotels. I met an architect at the local coworking facility, and she showed me a fantastic conversion she had recently finished. 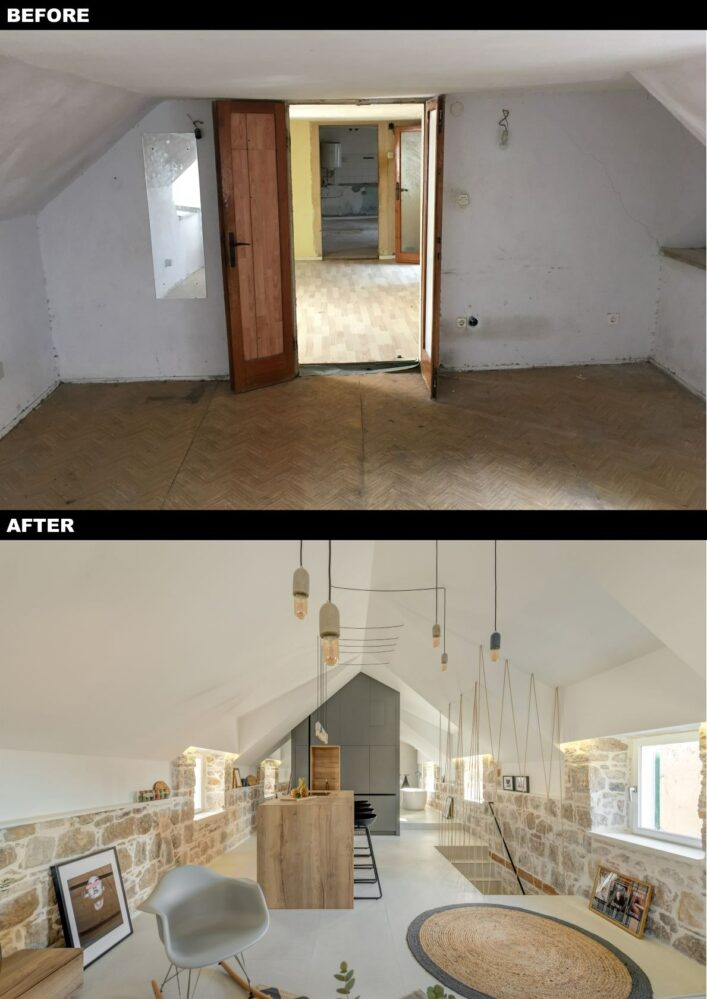 The renovated apartment is on the top floor of the building to the right.

All this made me happy for the people of Varoš — and Split. After all, what good is blight to anyone?

Of course, the transformation of Varoš is not yet complete. Plenty of elegant decay remains.

And I was glad to see it. Isn’t there beauty in imperfection too?

Or maybe I only feel that way because my own imperfections had almost caused me to miss the hidden gem called Varoš.

Hopefully, I’ve learned my lesson, and I won’t miss what is right underneath my nose ever again.

This Week on LGBTQ Twitter: People stay saying gay and clapping back at JK Rowling