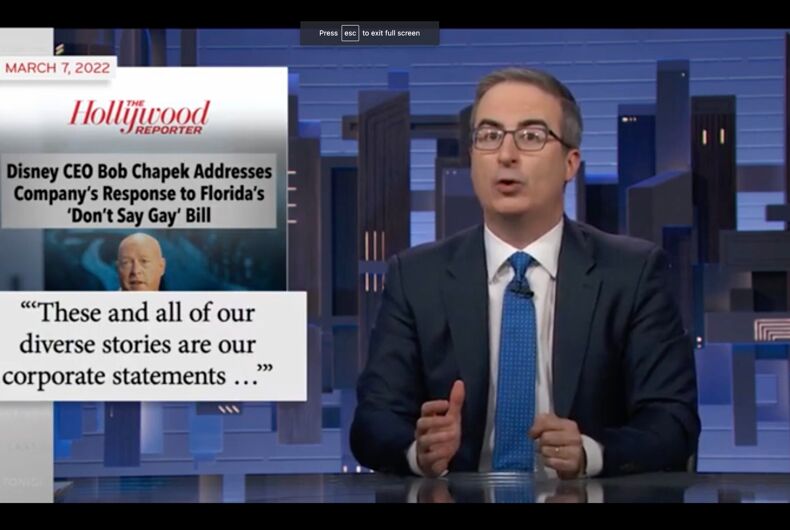 Despite voicing Zazu in Disney’s remake of The Lion King, John Oliver let Disney have it in his most recent episode of Last Week Tonight, criticizing the company’s controversial response to Florida’s “Don’t Say Gay” bill.

Disney has been in hot water ever since it was revealed the company donated money to the GOP backers of the bill. “Are they morally bankrupt for doing that?” Oliver asked. “Who’s to say? I’ll tell you, I am. I am to say. After all, I’m Zazu.”

Oliver also criticized CEO Bob Chapek for his initial refusal to apologize or take a public stance against the bill, and for his declaration that Disney’s diverse stories speak for themselves.

“That is obviously nonsense,” Oliver declared, joking that the hit film Encanto is an appropriate reference for what’s happening in Florida because its hit song, “We Don’t Talk About Bruno,” is about everyone refusing to talk about one member of their family.

“Generally, movies can affect how people view the world, but is this really a path that you want to go down, Disney?” Oliver asked. “Because you are the same company that’s coded basically every villain in your movies as gay, stereotyped minorities to a breathtaking degree, and had something called a ‘wench auction’ in place at Disneyland until 2018, so I don’t know that you’ve had a 100% net positive effect here.”

Chapek has since changed his tune regarding the “Don’t Say Gay” bill. Due to immense public and employee pressure, he has now spoken out against the bill and promised to stop all Florida political donations for the time being.

But Oliver wasn’t satisfied. He lambasted Chapek for claiming the company didn’t know how the politicians would use their donations, calling the claim “actively insulting.”

He also said that in many ways, it’s simply too late.

“Marginalized creators have made billions of dollars for Disney. Now, should it embarrass them that it took them until this week to realize that they shouldn’t take that money and use it to actively undermine those creators’ interests? Who’s to say? I’ll tell you. I am. I’m Zazu, remember, and while I haven’t been invited back for the prequel yet, after tonight I’ve got a pretty good feeling about it.”

Oliver also spent time dissecting what the “Don’t Say Gay” bill would actually do, concluding that, “It’s not about sex at all; it’s about denying the existence of gay people.”

J.K. Rowling decided to speak on behalf of lesbians & OMG it didn’t go over well