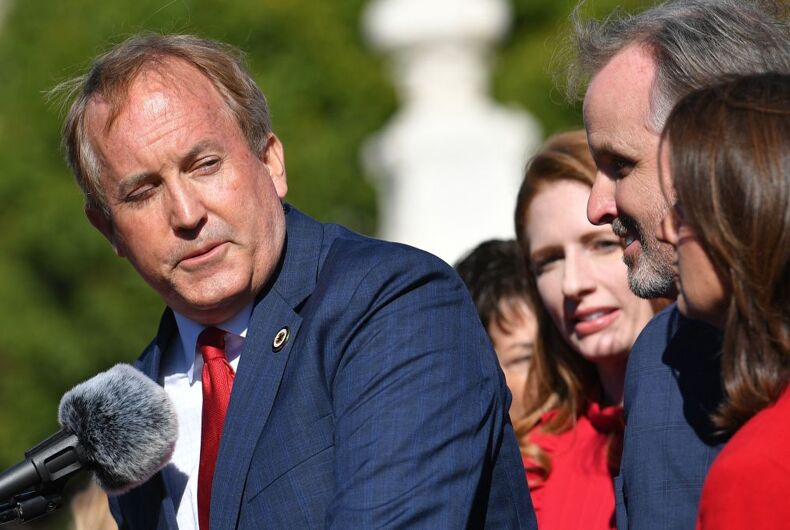 Texas Attorney General Ken Paxton speaks outside of the US Supreme Court in Washington, DC on November 1, 2021. The Supreme Court is set to hear challenges to Texas' restrictive abortion laws. - The conservative-majority US Supreme Court hears challenges on Monday to the most restrictive law passed since abortion was made a constitutional right nearly 50 years ago -- a Texas bill that bans a woman from terminating a pregnancy after six weeks. (Photo by MANDEL NGAN / AFP) (Photo by MANDEL NGAN/AFP via Getty Images)Photo: AFP via Getty Images

Texas Attorney General Ken Paxton (R), who has been accused of felony misconduct multiple times and is currently awaiting trial on fraud charges, has spent the past few months attacking transgender children and their parents.

But Paxton has apparently decided to pick on someone closer to his own size, lobbing an ugly insult on Twitter about Assistant Secretary for Health Admiral Rachel Levine. He tweeted a photo of her being honored by USA Today as one of their “women of the year” with the caption “Rachel Levine is a man.”

In mid-February, Paxton issued a non-binding opinion stating that gender-affirming health care for transgender youth is a form of child abuse. The following week, Gov. Greg Abbott (R) sent a letter to the DFPS demanding that they investigate parents who provide gender-affirming medical care to their transgender children.

However, multiple studies have shown the benefits of providing transgender youth with access to affirming healthcare, including pubertal suppression and hormone therapy. Paxton’s opinion and Abbott’s subsequent order have been condemned by every major medical association since it flies in the face of established care guidelines for transgender children.

Admiral Levine is the first transgender four-star officer in all eight of the uniformed services. She is also the first female four-star admiral in the U.S. Public Health Service Commissioned Corps.

As Physician General of the state of Pennsylvania, she led the state’s response to the coronavirus pandemic, at times facing heavy criticism – and straight-up transphobia – from conservatives in her state.

The internet, of course, wasn’t about to let a would-be felon get away with lobbing disgusting comments about one of the country’s armed services leaders. The blowback was quick and substantial as users called on Twitter to take down the tweet for violating the site’s prohibition of hate speech and personal harassment. And, of course, they pointed out Paxton’s horrendous and duplicitous record as a lawman.

“You’re needlessly attacking someone who has dedicated her illustrious career to helping people. This is truly shameful,” Dr. Jack Turban responded.

“Your insecurity is pathetic,” Rachel Vindman added to the chorus.

Others, like activists Charlotte Clymer and Amanda Knox, encouraged users to report the tweet for violating Twitter’s standards. So far, Twitter has yet to take action.

You’re needlessly attacking someone who has dedicated her illustrious career to helping people. This is truly shameful: https://t.co/uGSO7Be2RP

Paxton wakes up daily and wonders "How can I be a greasy pile of sh*t today?"

This is the life of Mama Bears of Transgender kids in Texas. He’s just mad our public pressure helped stop his big bad plans. I’ve never been to the Capitol this much. pic.twitter.com/pj0hUoqg6r