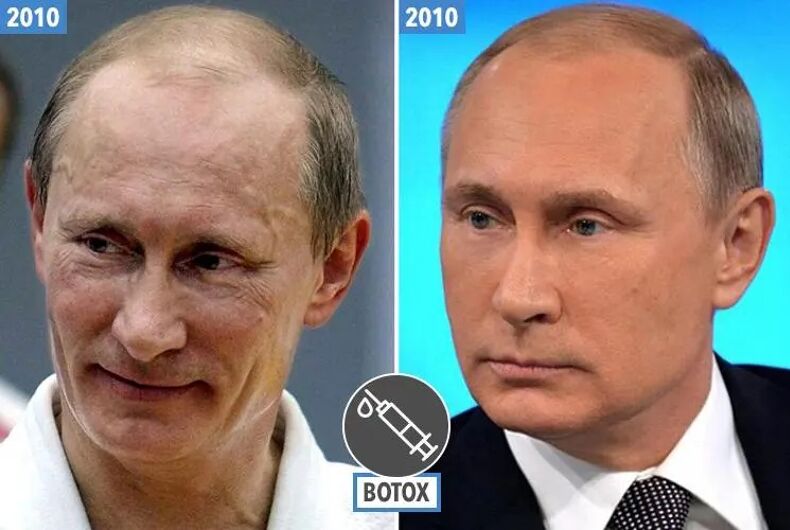 A certain someone has had some work donePhoto: composite

Russian President Vladimir Putin is finding himself in a hard spot after several major drug companies announced they would stop delivering non-essential medications like Botox and Cialis to Russia.

The country’s unprovoked invasion of Ukraine has led to sanctions from countries around the world – including consumer goods and entertainment options as western companies pull out of the country en masse to protest the aggression.

But Eli Lilly and Co., Novartis, Abbvie Inc., Johnson & Johnson Inc, Pfizer, Bayer, and Abbott Laboratories have all announced that they will cut back operations inside the country while still providing medication necessary for diseases like cancer and diabetes along with vaccines.

Putin is notoriously obsessed with his appearance. The vain dictator has had several procedures done and photos show that he regularly uses Botox. He has also built his reputation off of being a “manly man,” complete with photos of him shirtless and riding horses, hunting, and the like, leaving many to wonder what he has to prove.

“For nearly 150 years, Lilly has worked to ensure patients have access to the medicines they need, no matter where they may live,” the company said in a statement. “Our Russian operations are now only focused on ensuring people suffering from diseases like cancer and diabetes continue to get the Lilly medicines they need.”

Profits made from selling the medically necessary medication will be donated to humanitarian efforts.

The pharmaceutical and healthcare industries are among the only ones left doing considerable business with Russia. Medication and the supplies needed to make them are exempt from sanctions.