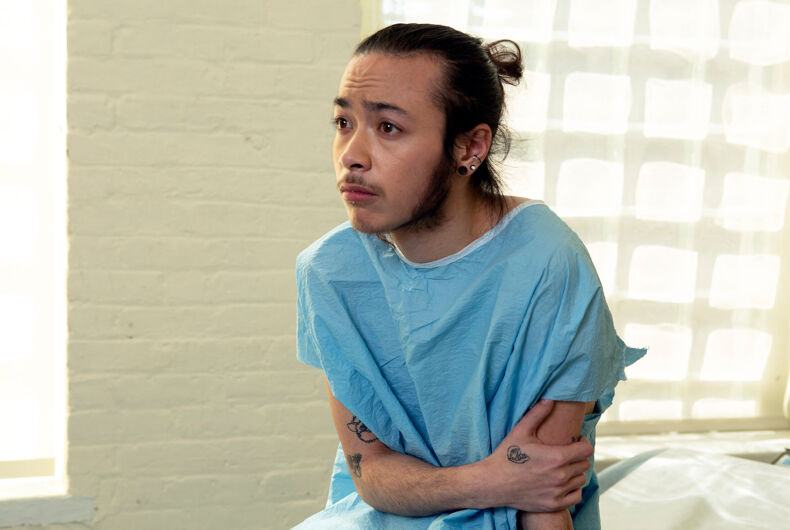 Idaho is poised to join a growing number of states in criminalizing the provision of affirming healthcare to transgender youth.

Republican Rep. Bruce Skaug wants to add language barring transition-related care for minors to an existing bill prohibiting “female genital mutilation,” which is also referred to as “cutting” or “circumcision.” Boise State Public Radio reports that the proposed bill passed out of a congressional committee on Friday.

Related link: Idaho passed 2 anti-transgender laws during the pandemic. It’s getting sued for both of them.

“It’s a bill to get proper treatment and to prevent them from lifelong, permanent decisions that will make them sterile and mutilate their bodies,” Skaug said.

If approved, the legislation would make it a felony punishable by up to life in prison to perform gender-affirming surgeries, provide puberty-blocking medication or cross-sex hormones, or remove any “otherwise healthy or non-diseased body part or tissue.”

It would not prohibit doctors from performing genital surgery on infants whose sex is non-binary; a practice intersex activists would like to see banned.

Transgender youth were among those that testified against the bill.

“By voting yes on House Bill 675, you are voting to kill me and other kids just like me,” 16-year-old Eve Devitt testified.

Multiple studies show that transgender youth experience high rates of suicidality, and that access to affirming healthcare typically leads to significant improvements in their mental health and quality of life.

Danielle Horras, a Boise resident and mother of a transgender child, criticized lawmakers for attempting to infringe on her right to care for her child.

“Some Idaho politicians, however, want to take away our ability to make internal family decisions about what is best for our child,” told the Idaho Statesman. “I am so fortunate to have a daughter who is strong enough and brave enough to say, ‘I know who I am.’ And I am shocked to hear politicians telling her that they know who she is and what’s right for her, better than she and her family know.”

She went on to call out lawmakers’ hypocrisy for not practicing what they preach:

“’Local control’ and ‘parent choice’ shouldn’t be just buzzwords to serve politicians when it’s convenient. If you want to live in a state that controls you, that removes your choice, that tells you how to raise your children, a state that inserts itself into your family’s private medical decisions, then maybe you should support HB 675, a bill that criminalizes medical experts for providing care to my transgender child. This bill puts politics over the health and well-being of my family and turns my beautiful and thriving daughter into a political prop.”

Former Idaho State Rep. and LGBTQ activist Cole LeFavour described the proposed bill as “cruelty” and urged Idahoans to speak out against it.

“Please say that hate and disrespect for the freedom of parents and young people — likely at the cost of the long term life/mental well-being of a child — this disregard for our current understanding of the complexity of gender— IS UNACCEPTABLE,” LaFavour wrote in a public Facebook post.
LeFavour, who was arrested during “Add the Words” protests at the Idaho Statehouse, had a clear message for allies: “Don’t sit quietly.”
“If you know a transgender person under 18, you know that to lump hormone blockers in with all other surgeries and treatments or to deny any healthcare is the greatest of cruelties — because in puberty, we as humans have that one chance to transition seamlessly,” they wrote. “And some want to take even that away. For what? At what cost to young peoples lives, to religious freedoms, self determination, family privacy, and individual liberty?”
The bill goes to the Idaho House of Representatives next.  Lawmakers in Arkansas, Tennessee, and Texas have also advanced efforts to outlaw transition-related care for youth.
News
cross-sex hormones, felony, gender-affirming care, gender-affirming surgeries, hormone therapy, Idaho, legislation, local control, Parent's Rights, parental rights, parents choice, pubertal suppression, Say the Words, Suicide, Transgender, transgender children, Transgender Youth, transition-related care