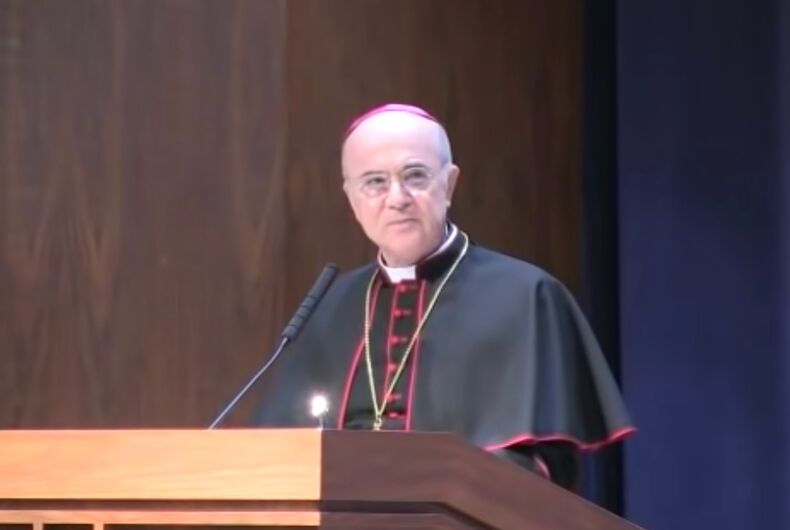 Italian Archbishop Carlo Maria Viganò, who once arranged a meeting between homophobe Kim Davis and the Pope, is back on his conspiracy theory pulpit.

The former Vatican ambassador to the United States parroted conspiracy theories about the “deep state” and “new world order” in a more than 10,000-word letter that critiques Ukraine President Zelensky for both being too LGBTQ-friendly and not friendly enough.

Related link: The Catholic Church is at war with itself over LGBTQ issues

Early in the letter, Viganò writes that Zelensky is a “mediocre” actor who was brought to power by the media and uses his position to promote “LGBTQ ideology.”

“Zelensky’s performances in drag are perfectly consistent with the LGBTQ ideology that is considered by its European sponsors as an indispensable requirement of the ‘reform; agenda that every country ought to embrace, along with gender equality, abortion and the green economy,” Viganò says.

Viganò also promoted Russian President Vladimir Putin’s defense of the invasion of Ukraine by accusing Zelensky of supporting neo-Nazi movements including Misanthropic Vision, which he describes as “a neo-Nazi network spread across 19 countries that publicly incites terrorism, extremism and hatred against Christians, Muslims, Jews, Communists, homosexuals, Americans and people of color.”

The outspoken archbishop is part of a growing far-right faction within Catholicism and has a history of making anti-LGBTQ comments. But he first made headlines after coordinating a meeting between the Pope and Kim Davis, the Kentucky county clerk who was jailed for refusing to issue marriage licenses to same-sex couples.

Viganò previously claimed that a “gay lobby” has taken over the Vatican.

“[Pope Francis’] words on this topic — and even more the actions and words of those who surround him — unfortunately, confirm that an operation of legalization of homosexuality is currently underway and that prelates and theologians are carrying this discussion forward who have manifested without equivocation that they are unfaithful to Catholic teaching,” he said. “Let’s not forget that the legitimization of homosexuality is part of the agenda of the New World Order.”

The archbishop’s lengthy diatribe echoes the homophobia of Patriarch Kirill, head of the Russian Orthodox Church, who has blamed Russia’s invasion of Ukraine on Pride parades.