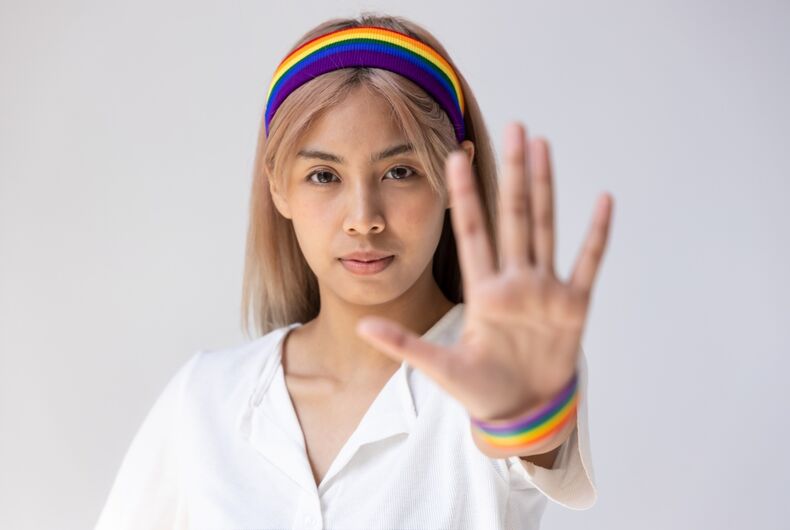 Amidst massive outcry against Disney’s refusal to speak out against Florida’s “Don’t Say Gay” bill, CEO Bob Chapek announced yesterday that the company will donate $5 million to the Human Rights Campaign (HRC) and other LGBTQ rights organizations.

Chapek also said he would meet with  Florida Gov. Ron DeSantis (R) to discuss somehow preventing the bill – which would stop teachers from mentioning LGBTQ people in elementary schools – from being weaponized against LGBTQ people.

But for HRC, that’s not enough. A press release from the organization stated that it would not take any money from Disney “until meaningful action is taken to combat” the “Don’t Say Gay Bill” that has passed the Florida legislature and is awaiting the Governor’s signature.

“The Human Rights Campaign will not accept this money from Disney until we see them build on their public commitment and work with LGBTQ+ advocates to ensure that dangerous proposals, like Florida’s Don’t Say Gay or Trans bill, don’t become dangerous laws, and if they do, to work to get them off the books,” said HRC’s interim president Joni Madison.

“Businesses have had and continue to have a major impact in the fight for LGBTQ+ rights, from marriage equality to the defeat of House Bill 2 in North Carolina and beyond. While Disney took a regrettable stance by choosing to stay silent amid political attacks against LGBTQ+ families in Florida — including hardworking families employed by Disney — today they took a step in the right direction. But it was merely the first step.”

“HRC encourages Disney, and all employers, to continue to fight for their employees – many of whom bravely spoke out to say their CEO’s silence was unacceptable –  and the LGBTQ+ community by working with us and state and local LGBTQ+ groups to ensure these dangerous anti-equality proposals that harm LGBTQ+ families and kids have no place in Florida. Every student deserves to be seen, and every student deserves an education that prepares them for health and success — regardless of who they are. This should be the beginning of Disney’s advocacy efforts rather than the end.”

Disney has been in hot water ever since it was revealed that the company donated to the GOP sponsors of the bill and subsequently refused to take a public stance against it.

But at the annual shareholders meeting yesterday, Chapek reportedly declared for the first time that Disney does not support the bill.

In an internal memo sent to Disney staff earlier this week, Chapek expressed solidarity with the LGBTQ community but said “corporate statements do very little to change outcomes or minds” and that the best way to take a stand is through “the inspiring content we produce.”

Employees, however, have been urging the company to speak out under the hashtag #DisneySayGay.