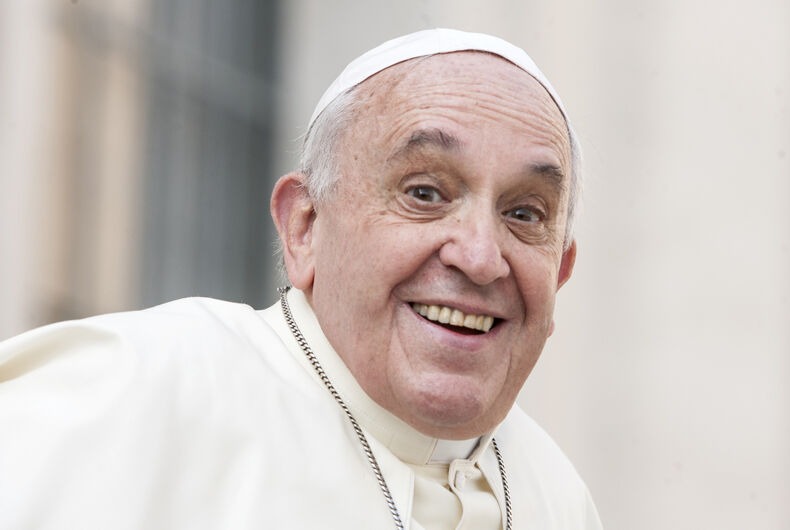 Is the pope Catholic? According to ultra-conservatives in the Church, not Pope Francis.

In an extraordinary move, the former Vatican ambassador to the U.S. is calling on Francis to resign over the Church’s sexual abuse scandal. But at the heart of the debate is the Catholic right’s insistence that Francis is heretical when it comes to LGBTQ issues.

Archbishop Carlo Maria Viganò issued the 11-page letter to two American websites tied to the Church’s right wing. The timing was clearly meant to embarrass the pope as he was finishing up a visit to Ireland, which has been reeling from the Church’s sex abuse scandals.

In the letter, Viganò says that the pope knew about allegations against Cardinal Theodore McCarrick and did nothing about them.

“Pope Francis must be the first to set a good example for cardinals and bishops who covered up McCarrick’s abuses and resign along with all of them,”Viganò insisted.

There’s no question that, even by the Vatican’s standards, the pope has been slow to address the rot behind the sexual abuse of thousands of children by clergy. But that’s not what Viganò really cares about. As his letter demonstrates, he’s animated by hatred of gay people in the Church.

Viganò devotes large chunks of his letter to rehearsing his grievances against “the homosexual current in favor of subverting Catholic doctrine on homosexuality,” implying that several high-ranking clergy are gay. Viganò’s makes clear that his real goal is that “the homosexual networks present in the Church must be eradicated.”

Like most right-wing Catholics, Viganò equates pedophilia with being gay. He believes that the sexual abuse scandal is entirely the fault of gay clergy, even though there is ample evidence of priests abusing girls as well.

“I think Viganò represents the part of the right wing of the church that sees the LGBT issue as the defining issue of this millennium, or this century, and this pontificate,” Massimo Faggioli, a professor of theology and religious studies at Villanova University, told Slate.

“They think that anything can and should be done to stop Pope Francis from ushering in a more welcoming church for LGBT people. So in this there is a convergence between Viganò, who has always been obsessed with the gay lobby and gay conspiracy, and the American Catholic right.

Indeed, Viganò has happily inserted himself into the culture wars in the U.S. It was he who arranged for the notorious meeting between Pope Francis and Kim Davis, the Kentucky clerk who refused to issue marriage licenses to same-sex couples.

Apparently, the import of the meeting caught the pope by surprise and Viganò lost his job. Adding to his grudge against Francis is the fact that Viganò was never named a cardinal.

Moreover, in the past, Viganò himself was happy to cover up for at least one closeted bishop.  Viganò singlehandedly killed an independent investigation into allegations of sexual misconduct by then-Archbishop John Nienstedt of Minneapolis.

Nienstedt was credibly accused of frequently gay bars and hitting on men, but his willingness to crusade against marriage equality apparently mattered more to Viganò.

Credibility issues aside, the letter is really about a coup by the right to return the Vatican to the hardline era of Pope John Paul II and Pope Benedict. For an archbishop within the Vatican to make such politically fraught allegations against his boss is a sign of just how divided the Church is.

It’s not as if Francis is preparing to officiate at a mass same-sex wedding. He has carefully adhered to the Church’s doctrine on gay issues. But he has demonstrated that he cares about people as much as ideology, which makes him a threat to the right.

Viganò’s letter is the opening salvo in an open battle for the Church’s future. Already, several American bishops have lined up behind him.

“The corruption and filth which have entered into the life of the Church must be purified at their roots,” Cardinal Raymond Burke, a vociferous opponent of LGBTQ rights, told LifeSiteNews.

But the “filth” that the ultra conservative clergy want to eliminate are gay clergy, not abusive clergy. The sex abuse scandal is secondary to their bigger goal.

As for the victims of the abuse, they hardly seem to matter at all.