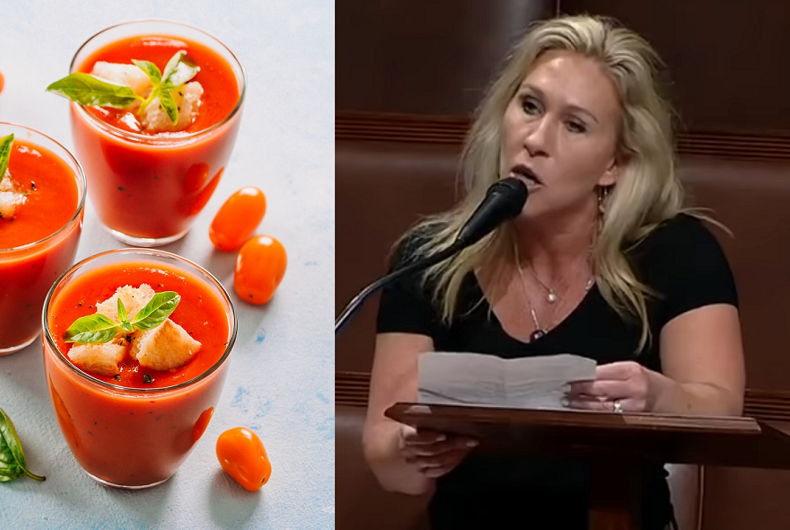 She was on the podcast Real America with Dan Ball to accuse Speaker Nancy Pelosi (D-CA) of spying on members of Congress.

Related: Republicans are lining up to challenge Marjorie Taylor Greene for her seat in Congress

“Not only do we have the D.C. Jail, which is the D.C. Gulag, but now we have Nancy Pelosi’s Gazpacho Police, spying on members of Congress, spying on the legislative work that we do, spying on our staff, and spying on American citizens that want to come talk to their representatives,” she said. “This government has turned into something it was never meant to be, and it’s time to make it end.”

She was probably trying to compare Capitol Police to Nazi Germany’s secret state police, the Gestapo. Greene has a long history of comparing even mild inconveniences to the Holocaust and Nazism.

BREAKING: "The Hamburgler has been arrested by the Gazpacho Police and thrown into a Goulash."

Gazpacho police: don't warm it up! I'm surprised she didn't say goulash instead of gulag.

Did someone already use “No Coup For You!” because I call it if it’s still available. https://t.co/zqUgPgbzgs pic.twitter.com/SOdmRuBrTN

A: Marjoram, of course. https://t.co/xm7txBHpKN

Even Rep. Greene was willing to make fun of herself.

No soup for those who illegally spy on Members of Congress, but they will be thrown in the goulash.#Gazpacho #Gestapo

Greene was referring to Capitol Police entering the office of Rep. Troy Nehls (R-TX), who claimed without evidence that their “Intelligence Division investigated my office illegally and one of my staffers caught them in the act.”

U.S. Capitol Police Chief Thomas Manger said this past Tuesday that the congressmember’s door was “left open and unsecured, without anyone inside the office,” so officers entered to “document that and secure the office.”

That incident occurred in November on the Saturday before Thanksgiving.