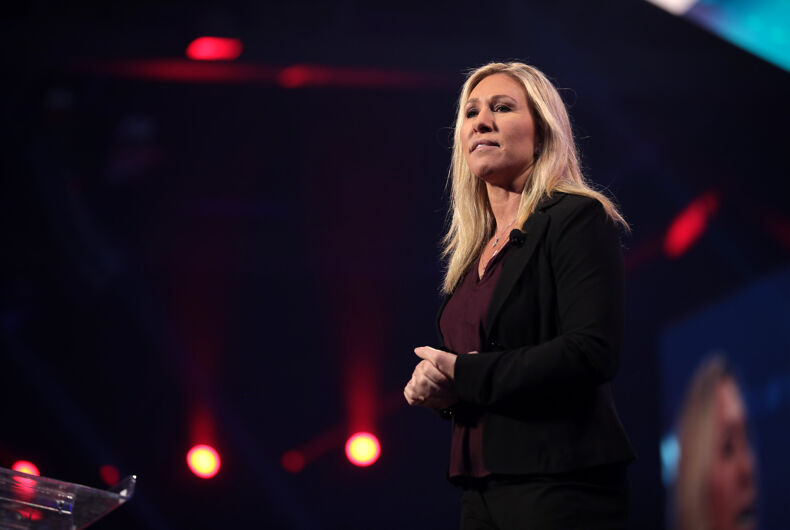 Rep. Marjorie Taylor Greene (R-GA) may be the darling of the MAGA set, but her fellow Republicans are coming out of the woodwork to challenge her for her seat in Congress.

Voters, they say, are “mostly tired of her crap.”

Charles Lutin, a retired physician, and Jennifer Strahan, the founder of a health care advisory firm, have both been actively campaigning against the congresswoman and they say that, for the most part, they don’t even need to mention what she’s done to elicit a reaction.

“You don’t always have to go around and tell people what she has done or said,” Strahan told the Associated Press. “That’s known.”

“I think people in this district are mostly tired of her crap,” Lutin added. “It’s not anything like 95% are tired of her. But I think it’s a good strong majority.”

While the rural portions of the district remain Trump country and the inflammatory congresswoman has staunch support, changes to the district after redistricting have made her vulnerable to a more moderate Republican. The maps, redrawn by Republican state legislators, shifts her district closer to Atlanta and its more moderate exurbs.

Greene has many opinions and beliefs that are outside the mainstream ranging from believing that President Joe Biden is using “weather weapons” to create tornadoes to believing that California wildfires were started by “lasers” in space connected to Jewish bankers. And she has a history of anti-LGBTQ statements and actions.

She said last week that she’s considering a run for the White House during an interview on the rightwing extremist show InfoWars.

“Republicans nationwide, as well as Republicans in that district in Georgia, do understand and do want to look to the future, and what is best for the nation,” Bobbie Kilberg, a well-known GOP donor, told the AP. “And Marjorie is not that person.”

If Americans didn’t know the Holocaust was about race, they do now