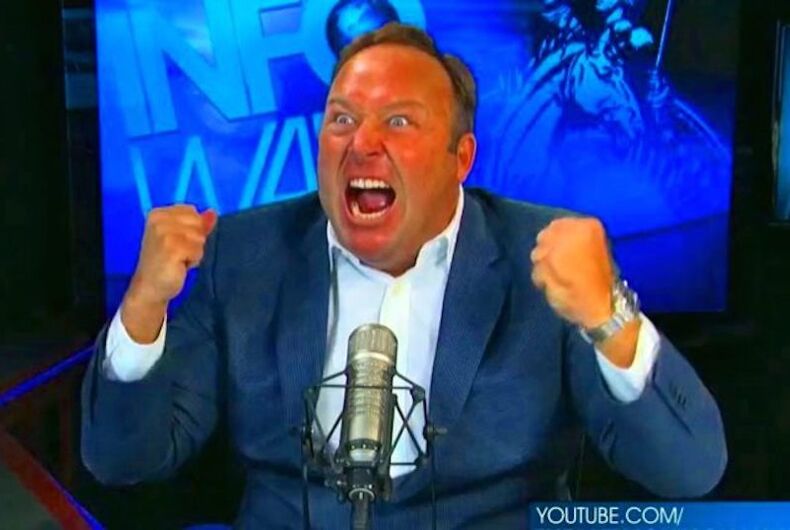 Alex Jones, the rabidly anti-LGBTQ conspiracy theorist who hosts the web-show InfoWars was banned from Facebook, YouTube, iTunes, Twitter and Vimeo last year. But he has apparently snuck back onto Facebook, and so far he’s getting away with it.

The Daily Dot reports that Jones’ InfoWars is now available on Facebook via three pages called NewsWars, InfoWars Live 24/7 and Prison Planet.TV. All of them run anti-LGBTQ content which conflates LGBTQ rights with pedophilia.

Jones has admitted that his company operates NewsWars and its related website, NewsWars.com, but he has denied personally running any of the Facebook pages.

Many of the NewsWars.com posts contain InfoWars videos, helping Facebook users connect with Jones and his anti-LGBTQ and Islamophobic views despite formally being banned on the world’s largest social network.

The Daily Dot says, in NewWars’ posts and videos, “Muslims, LGBTQ people, and immigrants are favored targets, and violence is often glorified.”

The NewsWars Facebook page currently has over 33,500 followers and over 3.9 million video views, according to The Washington Post.

NewsWars also had a channel on YouTube, but it was recently banned.

The NewsWars Facebook page recently posted a video entitled, “The Sordid History of Pedophilia and the Political Left” which claims that liberal, progressive and Democratic political supporters secretly endorse pedophilia.

If this claim sounds familiar, it’s probably because it echoes the Pizzagate conspiracy theory that Jones long espoused. Jones falsely claimed that a gay-owned Washington D.C. pizzeria, Comet Ping Pong Pizza, ran a secret child sex ring out of its nonexistent basement. The conspiracy convinced a gunman to shoot up the pizzeria in December 2016.

When confronted with evidence of Jones’ return to their platform, Facebook said, “We are continuing to review reports that we receive from people on Facebook and take action in line with our Community Standards.” In Facebook-speak, that means they’re waiting until they’re publicly shamed into taking action.

In other good news however, Jones recently lost a legal battle against parents whose children were killed in the 2012 Sandy Hook Elementary School shooting. Jones claimed that the parents were “crisis actors” in a “false flag government operation,” leading to the parents receiving numerous death threats on top of their kids already having been shot to death.

The court loss states that Jones has to turn over internal documents revealing how he and InfoWars targeted these parents for his fraudulent accusations, leaving him susceptible to having his media machine exposed and targeted for even more lawsuits.