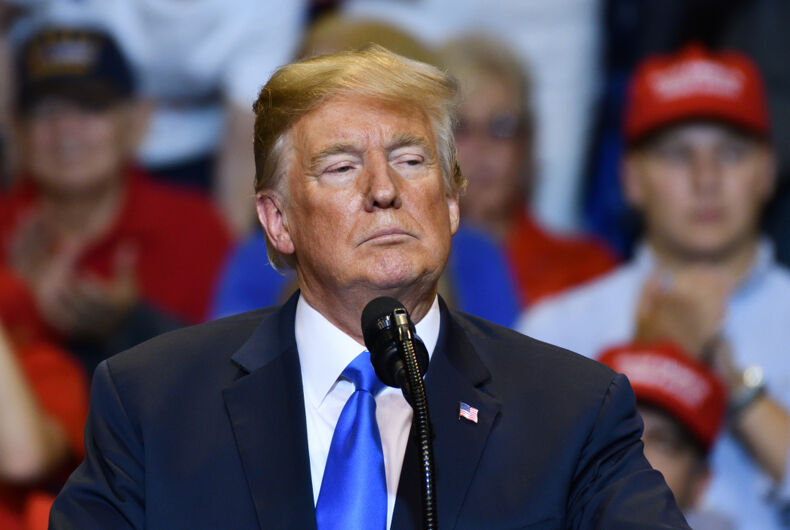 Today, the Trump-led government shutdown just became the longest-ever government shutdown causing an estimated 800,000 federal workers to not receive paychecks — that’s roughly the entire population of Seattle, Washington or Charlotte, North Carolina. Half of these employees are expected to continue working without pay.

While 800,000 workers might sound like a small fraction of the 325.7 million U.S. population, several indicators suggest that the Trump shutdown is hurting LGBTQ people in unique ways. Let’s take a look at three recent examples:

Yesterday, the LGBTQ media watchdog group GLAAD cited The Washington Post’s estimate that nearly 13,600 federal workers identify as LGBTQ, though the number could be much higher.

LGBTQ people experience higher rates of poverty than their straight peers. So, for many poor, queer federal employees, a single missed paycheck could prove the difference between stability and homelessness or bankruptcy.

White House economic adviser Kevin Hassett has said that receiving no pay basically constitutes a free “vacation” for federal workers, but that is putting lipstick on a pig.

The Transgender Foundation of America recently announced that it will disperse the money from its Transgender Disaster Relief Fund to help pay LGBTQ-identified federal workers, but it likely won’t be enough to sustain everybody.

Federal employees who work in immigration courts overseen by the Department of Justice aren’t being paid either, Time magazine reports. This leaves asylum seekers fleeing anti-LGBTQ violence from other countries in legal limbo as their court hearings have been definitely delayed.

This especially affects LGBTQ-identified asylum seekers from El Salvador, Honduras and Guatemala where sexual and gender-based violence is pervasive, says The Washington Post.

Undocumented immigrants can receive work authorization six months after applying for asylum, but they’re ineligible for public benefits like food stamps, Medicaid or public housing, making their survival in the U.S. much harder.

Buzzfeed News recently reported about a gay man who had his identity stolen but was unable to file an identity theft report with the Federal Trade Commission because of the government shutdown. Buzzfeed News writes, “According to the FTC, identity theft was the second-most-reported consumer complaint in 2017.”

As the shutdown continues, “80 TLS certificates used by .gov websites have so far expired without being renewed,” reports Netcraft, making U.S. federal websites inaccessible for many Americans seeking government help over the web.

Even worse, some domestic violence shelters are shutting down because they lack federal funds to continue their work. This will especially affect LGBTQ people as they experience domestic violence at higher rates than the straight population.

Alex Jones is back on Facebook, accusing LGBTQ people of being pedophiles (and FB is doing nothing)