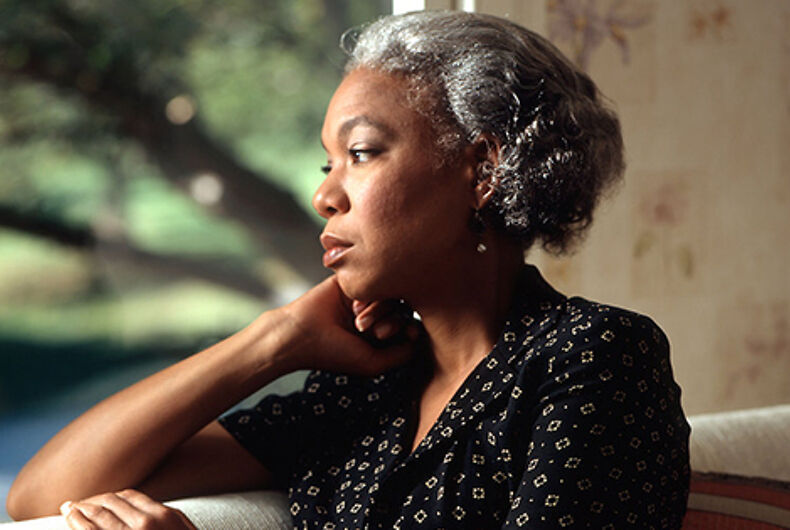 The Jills were the envy among us lesbian couples of African descent. Their public display of love for each other and their exchanges of their special terms of endearment was the stuff you read in romance novels. They were inseparable and we distinguished them by calling them Jill and Jillie.

When I received the call that one was being seen in the ER and other one was being detained by the police for battering, I knew it had to be a mistake. But looking back there were visible signs of interpersonal violence (IPV) that we sistah-friends came to understand and wished we could have intervened on their behalf.  But we were so enamored, envious and awestruck by their oversized demonstrative displays of love and seemingly respect for each other we didn’t see their troubled marriage.

October is Domestic Awareness Month, and within lesbian, gay, bisexual, transgender, and queer (LGBTQ) communities of color, not enough attention, education, intervention and advocacy is given to this issue.

A 2014 The Advocate article “2 Studies That Prove Domestic Violence is an LGBT issue” reports that “21.5 percent of men and 35.4 percent of women living with a same-sex partner experienced intimate-partner physical violence in their lifetimes….Transgender respondents had an incidence of 34.6 percent over a lifetime according to a Massachusetts survey.” The National Intimate Partner and Sexual Violence Study (NISVS) conducted in 2011 stated that LGBTQ communities of color are one of the demographic groups experiencing high incidents of domestic violence.

However, obtaining accurate statistics of how high IPV is in these communities are obfuscated by social stigmas and cultural taboos, including racism and other forms of oppression and discrimination.

What also interferes in obtaining accurate statistics on how high IPV is in these communities of color is that same-gender interpersonal violence is clouded with myths. And within these communities there are several cultural barriers preventing reporting domestic violence and receiving intervention services.

The black church is one of them.

Jill grew up in the church and whenever troubled and heavy burdened she took her woes and concerns there. The network of support through prayer and counselling weren’t available to Jill and her spouse once she came out.

In 2016, many black churches are woefully far behind the country’s acceptance of LGBTQ Americans. These places of worship are still spewing homophobic rhetoric from their bully pulpits. And unfortunately, some LGBTQ victims of IPV have internalized the church’s message that they are an abomination to God, and therefore deserved to be abused, flogged and beaten.

“I thought I showed strength by staying in the relationship. I thought if we acted happy we would become happy,” Jill said.

With too many churches espousing a theology emphasizing the place and value of suffering in one’s life as a test from God, like that of the biblical Job, coupled with the marriage vow “for richer or poorer, until death do us part” the act of forgiveness is so seductively elevated as both redemptive and virtuous that too many LGBTQ victims remain in abusive relationships.

The politic of silence is another cultural barrier.

While the politic of silence is rightfully aimed to diminish a deleterious white gaze on the black community – past and present – it isn’t useful for us to not voice and address problems plaguing our communities like HIV/AIDS, mental illness, suicide and IPV, to name a few. Rather than addressing these problems, they are spun into a damaging discourse of blame, shame, stigma and misinformation. And with many of us having to confront the daily microaggressions of racism and homophobia in the workplace and out in the world, the last thing many LGBTQ victims want to tackle is IPV at home, a “safe space.”

Jill’s spouse suffered with bipolar disorder and she always attributed her spouse’s violence to her mood changes. Looking back, we sister-friends only saw the couple during what they depicted as being “jubilantly high on love.”

The dominant view by both health care professions and law enforcement officers that communities of color, especially of African descent, have a predisposition toward violence gravely interferes with victims taking action, and a community raising awareness.

With a cultural distrust of law enforcement officers, due to the rash of shootings and killings of unarmed black men and women in streets across America, most in my community, straight or LGBTQ, call for them only in extremely dire situations, with prayers and  hopes of no fatalities.

Consequently, victims of IPV, especially LGBTQs, are not taken seriously.

For example, since both the victim and the abuser are of the same gender and are also in a consensual sexual relationship, many law enforcement officers confuse same-gender sexual violence as part and parcel of being homosexual.

Health care disparities in communities of color and LGBTQs are only exacerbated for LGBTQ people of color.  Sadly, this creates distrust, as well as a lack and under utilization of resources toward healing, prevention and moving on.

The Jills have finally separated, but not because of police intervention or heath care prevention. We sister-friends stepped in. Not everyone has a support system.

*The names are fictional and the couple described is a composite of numerous couples I counseled on IPV.