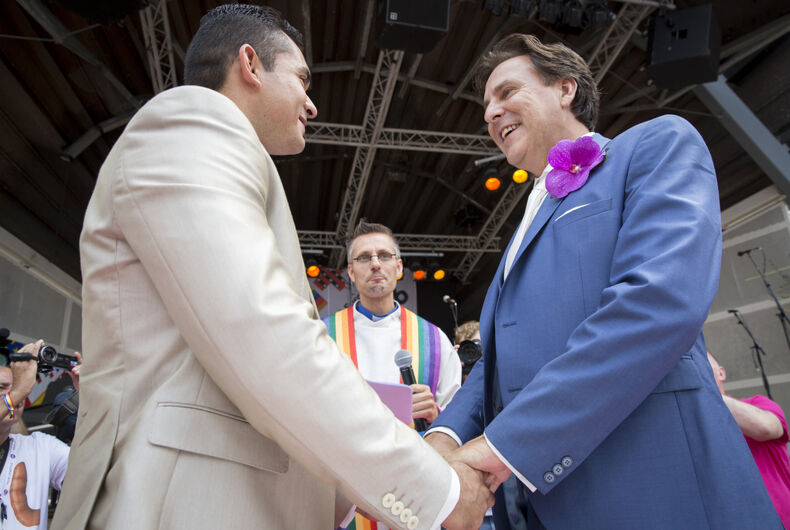 Although it hasn’t launched yet, Believr is a social app aimed at “an LGBTQ+ Christian dating community.” That may sound contradictory considering the Bible’s passages condemning homosexuality, but the Christian LGBTQ community is larger than you might think and Believr could accomplish positive cultural change by helping unite it.

It makes sense that an app would want to connect this sizable community. Grindr and Scruff probably aren’t ideal venues for religious queers seeking long-term relationships with people of similar faiths.

Believr’s website states that it wishes to help queer Christians “form a lasting relationship by uncovering your personal values” and helping them connect with others who share those values.

It’ll be interesting, however, to see which values the app will accommodate: Will it accept queer Christians seeking hookups, kink or polyamory, for instance? Will it allow atheists, spiritualists and non-Christians to join?

We’ve asked these questions, as well as what the app’s creators make of Leviticus 18:22 and 20:13, the two Old Testament Bible verses calling man-on-man sex an “abomination” worthy of death. Here’s what they had to say:

Believr is an inclusive LGBTQ+ Christian dating app; however, there’s no requirement to be a Christian to join Believr. The app is being built and marketed for LGBTQ+ Christians. That said, anyone is welcome to use the app.

The reason we’re building Believr is to provide a space for a diverse group of people who have felt too queer for Christians and too Christian for LGBTQ+ spaces. Conservative Christians don’t discriminate with their disapproval of LGBTQ+ Christians and LGBTQ+ non-Christians alike.

We have a broad view of human sexuality and believe everyone has value regardless of their sexual preferences. We believe in the basic human truth that we all want to be connected and loved. Anyone is welcome no matter how they experience or express their sexuality.

Our goal is not to divide the LGBTQ+ community, but to provide a platform for a specific demographic, just as other apps have been built out for niche groups of the broader LGBTQ+ community.

It is not the mission of this company to refute verses condemning homosexuality. There are other organizations doing the work of offering different interpretations. We are a part of the LGTBQ+ community and stand against the abuse and marginalization caused by the misinterpretation of these verses.

As the creators of believr, we believe that the verses surrounding homosexuality have been misinterpreted. For years they have been used to divide and abuse the LGBTQ+ community, which goes directly against the ethos of believr. We believe everyone has inherent value and is worthy of connection, regardless of who they love.

For now, Believr has a booth at Love Undivided: The 2019 Q Christian Conference in Chicago, which is happening this weekend. The conference’s breakout sessions include discussions around what it means to “Love thy neighbor” in these divisive times, sexual ethics and healing, as well as discussions about how non-white, bisexual, trans and intersex people figure into the church’s history.

It remains to be seen what Believr will offer its users. But apart from mere dating, connecting LGBTQ Christians could also help reform the church, making it more welcoming to LGBTQ people over the long term and possibly even changing how the LGBTQ community sees people of faith altogether.

Alex Jones is back on Facebook, accusing LGBTQ people of being pedophiles (and FB is doing nothing)