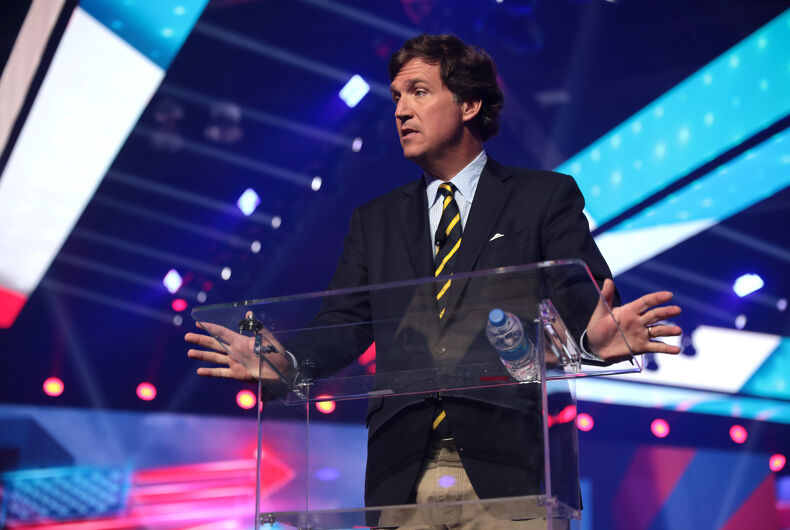 Tucker Carlson speaking with attendees at the 2021 AmericaFest at the Phoenix Convention Center in Phoenix, Arizona.Photo: Gage Skidmore

Fox News host Tucker Carlson continues to traffic in radical conspiracy theories and racist allegations, but he may have stooped to a new low on last night’s show.

Pipe bombs were found near the DNC and Republican National Committee (RNC) headquarters the night before the January 6 insurrection by Donald Trump supporters at the U.S. Capitol. Carlson, of course, found aspects of the story “strange” and worthy of further examination.

Harris was at the DNC during the violent attack, but was whisked out of the building shortly after the bomb was discovered. She had walked “within yards” of the explosive according to officials. The FBI is investigating.

“[This is] kind of a big deal. Why haven’t we heard that before?” Carlson said. “And why didn’t the Justice Department know? Why did the DOJ think Kamala Harris was at the Capitol?”

“It’s not like Kamala Harris hasn’t talked about January 6. She’s talked about it constantly since the day it happened. In fact, just last month she gave a speech in which she said that January 6 was so traumatic that all Americans ‘remember where they were and what they were doing when our democracy came under assault.’”

It was the “perfect moment” for her to stir up anger against conservatives by saying she “came within mere feet of a racist insurrectionist bomb.”

“What is strange is that of all the places Kamala Harris could have gone on January 6, she went to the DNC building, where her bodyguards promptly discovered the pipe bomb,” he said, not explaining why it’s strange for one of the top Democratic officials in the country to visit the DNC building.

“Would a Trump supporter have known where Kamala Harris was going to be that morning? Probably not. Even her political allies didn’t know for some reason,” Carlson said. “What’s going on here? We’re not sure.”

But Carlson assured viewers that he wasn’t trying to propagate one of the many wild false flag conspiracy theories promoted by Trump supporters, he’s just asking questions.

“Something is going on here, there’s no question about that, because the story doesn’t make any sense.”

lol this is so batshit i mean its just…its so so so bat shit pic.twitter.com/lxuZ1lV7BV

Marjorie Taylor Greene mocked for whining about the “gazpacho police”