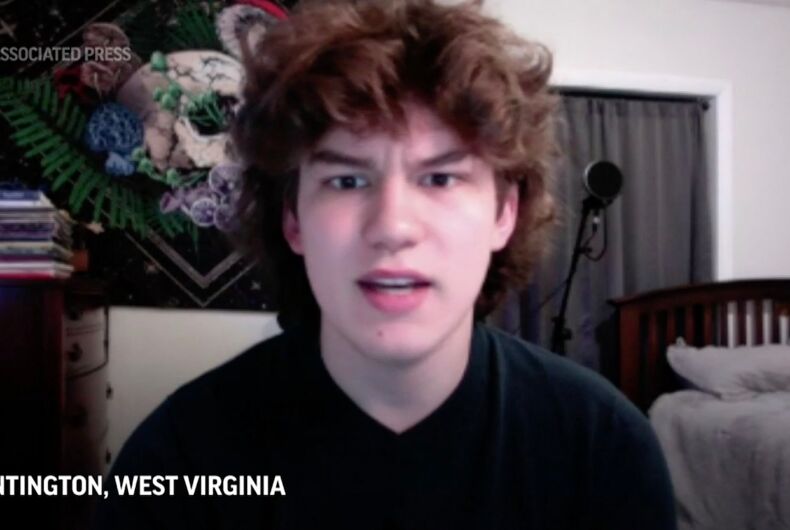 Huntington Senior Max Nibert, speaks out after being forced to attend a Christian revival at a public high schoolPhoto: Screenshot, AP Video

Students at a Huntington, West Virginia public high school are protesting after they were required to attend an evangelical Christian revival assembly hosted by the school’s chapter of the Fellowship of Christian Athletes (FCA), a well-known anti-LGBTQ organization.

Teachers required a group of students to attend an assembly in which evangelical preacher Nik Walker of Nik Walker Ministries told them to devote their lives to Jesus and the Bible or they would go to hell.

Many students at the school, which has over 1,000 students, were enraged that their constitutional right to religious freedom was violated.

Over 100 of them walked out of homeroom on Wednesday to protest. They chanted “My faith, my choice” and “Separate the church and state.”

A spokesperson for the school, Jedd Flowers, told the Associated Press the assembly was supposed to be completely optional and took place during a free period for students. Two teachers, he said, mistakenly required their classes to attend.

Flowers claimed something like this would never happen again, but the community is now debating whether even optional religious programming should be allowed within public schools.

“I don’t think any kind of religious official should be hosted in a taxpayer-funded building with the express purpose of trying to convince minors to become baptized after school hours,” said Huntington senior Max Nibert, who helped plan the walk out.

The nonprofit, Freedom From Religion Foundation, agrees and sent a letter to the school stating it cannot “be used as recruiting grounds for churches” and that it “is inappropriate and unconstitutional for the District to offer religious leaders unique access to preach and proselytize students during school hours on school property.”

The preacher, Walker, said he has never reached out to a school to ask to speak and has only ever been invited by students.

Nevertheless, students and parents are fighting back.

“It’s a completely unfair and unacceptable situation to put a teenager in,” said Bethany Felinton, whose Jewish son was told he couldn’t leave the assembly after asking his teacher. “I’m not knocking their faith, but there’s a time and place for everything – and in public schools, during the school day, is not the time and place.”

75 students have signed a petition asking the school board to apologize, administer consequences for the teachers who required their students to attend the gathering, and institute a policy surrounding religious speakers in schools.

The FCA, an organization founded to spread Christianity through sports that has been accused of encouraging public school coaches to proselytize to athletes, has a “sexual purity statement” that leaders are supposed to follow.