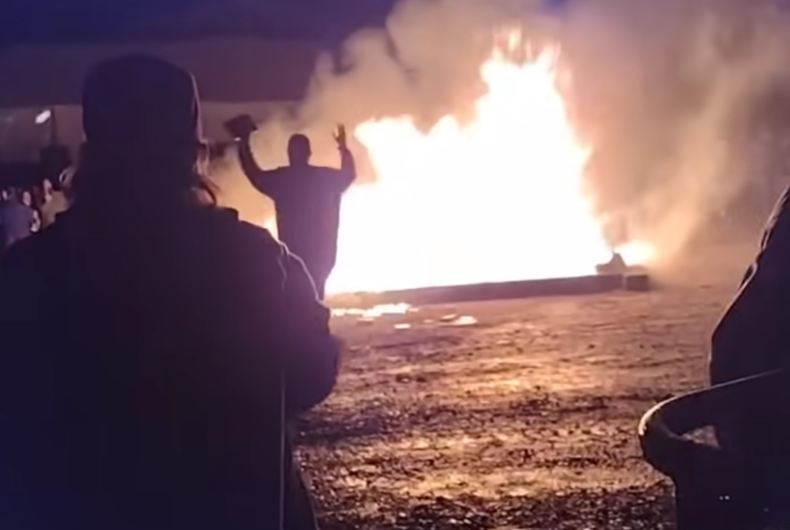 Chris Hardin's husband shouted "I burned the Bible" as the crowd cheered.Photo: Screenshot

A man and his husband went to a literal book-burning held last week by an anti-LGBTQ Christian pastor in Tennessee and threw a Bible in the fire while yelling “Hail Satan.”

“It took [my husband] shouting ‘I Burned a Bible’ several times before they stopped cheering and realized they’d been had – they aggressively threw us out but we had a chance to disgust them with a kiss before we left,” Chris Hardin wrote in a description of the video he posted of his participation in Pastor Greg Locke’s book-burning on YouTube.

Locke held the the book-burning outside of Nashville last week, telling congregants to go out to a bonfire set up outside the church because, “God is taking note and so is the Devil!”

“Let’s go give the devil a black eye,” he said.

Among the books burned were Harry Potter and Disney products. The former has been criticized by conservative Christians for promoting witchcraft and the latter for supporting LGBTQ equality in the workplace.

Congregants threw items – sometimes entire garbage bags – into the fire as people in the crowd cheered and airhorns blasted.

“I burned the Bible!” Hardin’s husband shouts after he threw a book in the fire in the video posted to YouTube. People in the crowd continued to cheer. “Keepin’ my copies of Darwin’s Origin of Species and Farhenheit 451!”

The crowd apparently notices what’s going on at this point and stops cheering as Hardin’s husband starts to leave. Several men came to escort him to the parking lot while he shouted “Hail Satan!” and laughing.

“In the name of Jesus Christ, you shall be saved,” one of the congregants shouted at him, while another said, “Get out of here, buddy.”

The couple got in the car and kissed, which made the men outside the car scream in disgust.

“You’re an absolute American hero my dude,” wrote one person.

“Honestly, regardless of however you feel about this move, that guy has balls of steel and is very brave for doing that,” another wrote.

“More of this please,” wrote a third. “What a wise and proper response to fools burning books.”