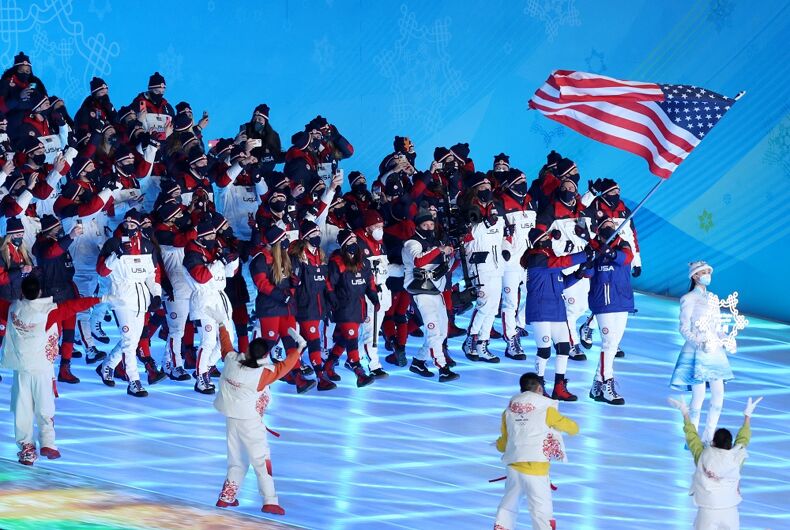 At the Opening Ceremony of the Winter Olympics in Beijing, out Team USA speed skater Brittany Bowe was the only out LGBTQ flag bearer.

Bowe – who could win the gold in the women’s 1000-meter race – was a back up flag bearer for an athlete who tested positive for COVID-19, but OutSports still called the moment a “powerful statement” from Team USA for its willingness to name an out athlete as one of its main representatives.

Related: At least 6 out athletes are representing the United States at the 2022 Winter Olympics

Bowe was also the first out athlete from Team USA to qualify for the winter games.

While homosexuality was decriminalized in China in 1997, same-sex couples cannot adopt, conversion therapy has not been banned, men who have sex with men cannot donate blood, and there are few protections surrounding discrimination.

The Chinese government also banned portrayals of “sissy men” from television programs and “gay love” from video games last September. The National Radio and TV Administration announced that they must “resolutely put an end to sissy men and other abnormal esthetics.”

Multiple human rights activists and advocacy groups are against holding the upcoming Olympics and other sports events in anti-LGBTQ areas or countries with questionable human rights records.

Why this Black trans activist owes everything to his “praying granny”

Does DoorDash deserve to be deemed one of the “Best Places to Work for LGBTQ+ Equality?”