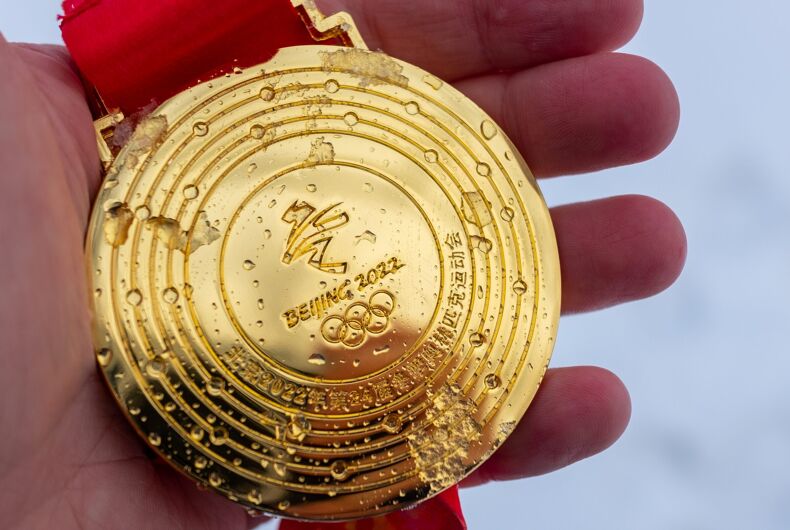 The 2022 Winter Olympics start this week, and there will be a minimum of 34 athletes competing in nine different sports over the three week-long festivities in Beijing, China that are part of the LGBTQ community. That’s the most ever in Winter Olympics history, beating the 15 out athletes recorded at the 2018 Games.

Team USA will have six out athletes among their 222 named squad members, including three on the figure skating team. They will send the second most out athletes to the Winter Olympics, following Canada with 10.

The athletes are included in an ongoing list being compiled by LGBTQ sports site Outsports, which reported at the end of the 2020 Olympics in Tokyo just months ago that there were 186 out athletes that participated in those Games.

Out of the 34 known to be part of the LGBTQ community and competing in Beijing starting this week, 11 are men — the most, since there hadn’t been any men that competed while out at the Winter Olympics prior to Gus Kenworthy, Adam Rippon, and Eric Radford in 2018. 22 of the out competitors are women, and one — Timothy LeDuc — is non-binary.

Kenworthy and Radford are returning for their second straight Games while out, in addition to out athletes Brittany Bowe, Belle Brockhoff, Daniela Iraschko-Stolz, Kim Meylemans, Sarka Pancochova,  and Ireen Wüst, who are also returning for yet another Olympics. Rippon and Hendrikx — who competed at the 2018 Winter Olympics in Vancouver, Canada — are returning as coaches.

Team USA’s out athletes will include LeDuc, Jason Brown, and reserve member Amber Glenn on the figure skating squad. Alex Carpenter will compete in ice hockey, Andrew Blaser in skeleton ice skating, and Bowe in speedskating.

Bowe became the first out athlete to earn a roster spot to compete for Team USA in the Olympics’ 109 scheduled events in the upcoming Games. She will compete in the 500 and 1000-meter ice speed skating competitions, after giving up the 500-meter ice speed skating spot she initially qualified for in favor of her friend and teammate, Erin Jackson. Now they will both race in the 500-meter for Team USA.

The Winter Olympics will be held in Beijing from February 2 to February 20, 2022, with the opening ceremony being held on February 4 and the closing on February 20. The first medals for the competitions in the 15 disciplines scheduled for the Olympics will be awarded on February 5. Citing the pandemic, organizers plan for audiences to only consist of invited individuals chosen by Olympic organizers, instead of ticket-buying spectators.

Officially, the United States government has enacted a diplomatic boycott of China for the Olympics, meaning they will not send any non-athlete representatives of the country to appear at the Games. Although athletes are allowed to compete as normal, China’s foreign ministry and Chinese media are already accusing Team USA athletes of planning to “sabotage” the Winter Olympics by going as far to “even refuse to take part” in events — proving that political issues will remain an issue at these Games as they did at previous ones.

At the Summer Olympics held last year in Tokyo, the United States finished with the most medals in the end, but “Team LGBTQ,” as the out athletes competing have been dubbed, earned 56 medals between them. That would have put them in sixth as an official Olympic Team.

That means Team LGBTQ had more medals than 200 Olympic squads that went to Tokyo. That was despite the exclusion of several out athletes from certain sports that excluded several athletes that largely excluded gender diverse athletes or those with differences in sex development (DSD).

In November, the International Olympic Committee released new guidelines for transgender participation in their sports that activists and athletes alike are hailing as a massive victory for trans equality.

Those principles – developed after two years of consultations with over 250 athletes and other “concerned stakeholders” – include inclusion, prevention of harm, non-discrimination, right to privacy, and – perhaps most notably – no presumption of advantage. However, they are not binding across the entire Olympic body.

Nation mourns out mayor after he dies by suicide