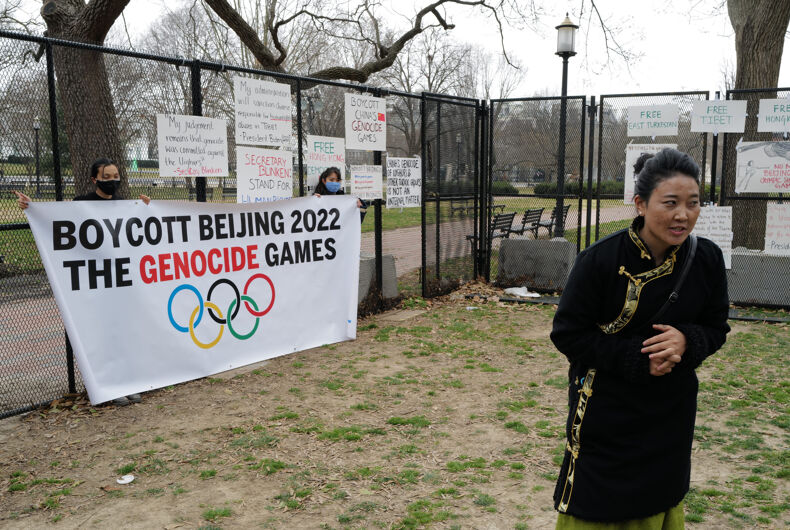 Uyghur activists at the White House in March protesting the continuing genocide against their people in China asking the Biden administration to boycott the 2022 Olympic Games.Photo: Phil Pasquini / Shutterstock.com

It was recently reported that the Biden Administration was considering a diplomatic boycott of the 2022 Winter Olympics being held in Beijing due to the Chinese government’s many abuses on human rights.

Major politicians in both parties have stated their support for this move, including Sen. Mitt Romney (R-UT), who ran the 2002 Winter Olympics in Salt Lake City, Utah, said that “it is unacceptable for China to have the honor of hosting the Olympics while the Chinese Communist Party commits genocide against the Uyghur people.” The news in the last few days regarding the disappearance of Chinese tennis player Peng Shuai, who is allegedly missing after she accused a prominent Chinese political leader of sexual assault, has added to the pressure to boycott.

Related: Organizers postpone the Gay Games in Hong Kong until 2023 as pandemic rages on

I am fully in favor of a diplomatic boycott, just as I was when I spoke out in an interview with Larry King in support of a boycott of the Winter Olympics scheduled in Sochi, Russia back in 2013. I believed then as I do now that if the Olympics are to be held in a country that abuses the rights of its people, that the United States should urge the event to be moved, or boycott it altogether.

People agree: a survey of thousands of Americans found 49 percent favor boycotting the Games due to China’s human rights record.

But this brings up the broader question: why does the Olympics keep choosing these countries with oppressive regimes to host in the first place?

I know there are probably a variety of reasons for this, one primarily being money. The Olympics require a huge financial and logistical commitment and investment, and a country like China certainly has the means and resources to provide it.

But at what moral cost? And at what point does the International Olympic Committee (IOC) get the message that it makes much more sense to choose a country that has a positive record on human rights than to create more controversy and division? This isn’t the first time that the Olympics have been mired in bad press and put the athletes in a terrible position.

In addition to that, Olympic gold medalist Tom Daley recently said that he would advocate for a ban on countries who outlaw homosexuality from competing in future Olympic Games. This is what the IOC did when they banned South Africa from participating for 20 years during the era of apartheid. Daley also said that it was wrong for the FIFA World Cup to take place in Qatar next year, a country where being gay is punishable by death.

Daley is absolutely right that it is wrong and nonsensical for these organizations to put these major sporting events in places where the protection of human rights is not paramount.

The Games in Beijing open in just under 11 weeks, and too many issues have arisen. If the IOC and FIFA haven’t figured out how to avoid awarding human rights violators by now, then we need to take a strong and vocal stand.

Yes, we need to consider options in favor of a boycott. It’s 2021 and we’ve been in this situation before, just as the United States did with the 1980 Olympics in Moscow.

We must keep fighting until we see real progress and change on the global stage.