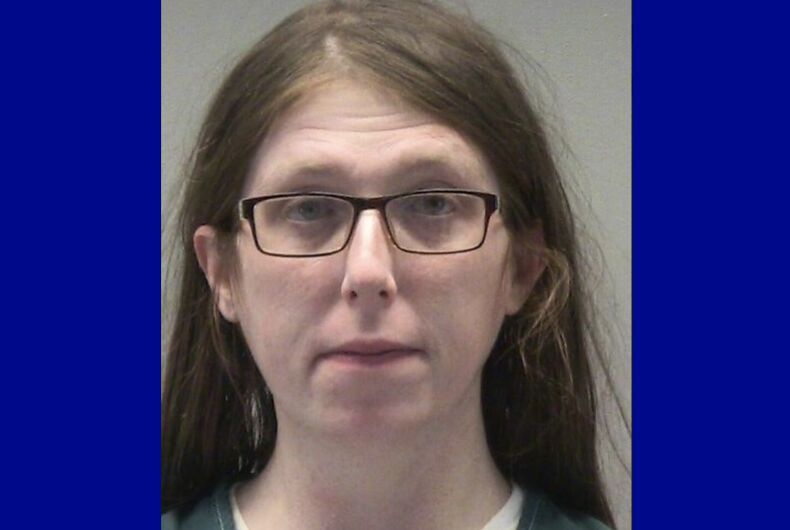 A new indictment filed in federal court shows that the government is charging a transgender woman from Illinois with seditious conspiracy in connection the January 6, 2021 Capitol Insurrection.

She could spend decades in jail if convicted. The seditious conspiracy charge is the most serious to come out of the investigation into the insurrection, showing that prosecutors believe that many participants in the riots that day were legitimately trying to overthrow the U.S. government.

Related: Proud Boy Capitol insurrectionist throws tantrum in court as he gets sent back to jail

The Oath Keepers, where Watkins is allegedly a dues-paying member, is “based on a set of baseless conspiracy theories about the federal government working to destroy the liberties of Americans,” according to the Southern Poverty Law Center.

The Anti-Defamation League said they are “heavily armed extremists with a conspiratorial and anti-government mindset looking for potential showdowns with the government.”

Oath Keeper leader Stewart Rhodes is among the 11 members of the group named in the indictment. Prosecutors believe that part of their group tried to enter the Senate chambers, where Mike Pence was presiding over the Senate’s largely ceremonial certification of the election until the crowd of angry Trump supporters chanted for his death and he was whisked to safety by the Secret Service. Others in the group split off to try to find House Speaker Nancy Pelosi (D-CA) but weren’t successful.

Watkins allegedly was part of the group going to the Senate, and prosecutors said that others in the group called her “captain” and “cap.”

Prosecutors working on Capitol Insurrection cases have been separating suspects into several levels of guilt, with those who were “swept up in the moment” in D.C. that day facing the lightest charges.

But prosecutors believe that the 11 Oath Keepers were more serious in their attempt to overthrow the government. Shortly after the November 2020 elections that Donald Trump lost and President Joe Biden won, Rhodes allegedly told his followers: “Prepare your mind, body, and spirit… we aren’t getting through this without a civil war.”

Watkins served in Afghanistan from 2001 to 2003 before transitioning and was forced out of the military “after her sexual orientation was discovered,” according to her lawyer. She owned a bar in Woodstock, Ohio before going to D.C. in January 2021.

Several days after the election, Watkins texted invitations to training for people she called “recruits,” saying, “I need you fighting fit by innaugeration [sic].”

In December, prosecutors believe that Rhodes told his followers there would be a “bloody, massively bloody revolution.” The group allegedly stocked up on thousands of dollars worth of weapons and gear.

Later that month, Watkins texted another member of the group: “We plan on going to DC on the 6th” and that she used a small group on the message app Signal to assign roles to the group on January 2.

On January 3, she allegedly told another member of the group that “weapons are ok now as well. Sorry for the confusion.” She also told that person to wear khaki or tan pants.

The indictment says that she put on “tactical gear” and marched to the Capitol with a smaller group of Oath Keepers on January 6. “Y’all, we’re one block away from the Capitol right now. I’m probably gonna go silent when we get there, because I’m gonna be a little busy,” she allegedly said in a channel on the walkie-talkie app Zello.

She and her group allegedly forced their way through the doors of the Capitol. Despite her worry that she would “go silent,” she kept on talking on Zello saying where she was in the Capitol.

“Get it, Jess. Do your fucking thing. This is what we fucking [unintelligible] up for. Everything we fucking trained for,” someone responded to her.

She and her group made their way to the Senate. Watkins allegedly told people in the crowd around her to “Push, push, push” and “Get in there, get in there” as the mob tried to get past a line of law enforcement officers.

Officers then used a chemical spray on the mob and they retreated. Watkins and her fellow Oath Keepers left the Capitol.

“Yeah. We stormed the Capitol today,” she allegedly wrote on Parler that day. Parler is a social media app for conservatives. “Teargassed, the whole 9. Pushed our way into the Rotunda. Made it into the Senate even. The news is lying (even Fox) about the Historical Events we created today.”

Several days later, Watkins messaged someone on Facebook: “We’ve been organizing a bugout plan if the usurper is installed… Something like 20+ Oathkeepers going to Kentucky mountains on hundreds of acres apparently.”

Prosecutors believe that she bought $17,500 of tactical gear and weapons in the days following the insurrection and met with other Oath Keepers to collect firearms. The FBI raided her home and found numerous weapons.

Watkins has pled not guilty to the charges. In a statement in December 2021, she accused the police of inciting the insurrection.

“My name is Jessica Watkins, and I am a January 6th defendant,” she wrote. “I have been incarcerated nearly a year for crimes I did not commit, so as to serve as a pawn for ‘The Party’ to exploit. And exploit they have.”

“Our charges are false, the truth manipulated, and we will one day be vindicated,” she wrote. She has since renounced the Oath Keepers.

Her lawyer argued that she should be let out of prison until her trial because she fears for her safety, because she was just “misguided” and not the extremist prosecutors say she is, and because “she believed that the president of the United States was calling upon her” that day.

“It is the crime of creating a serious disturbance, violence against lawful civil authority with intent to overthrow the government,” he said.

Watkins is not the only out LGBTQ person to have allegedly participated in the violence that day. Outspoken gay Republican Brandon Straka who founded the “Walk Away” movement was tweeting from the Capitol and was arrested several weeks later and pled guilty to a charge of disorderly conduct.

Gay hairdresser and podcaster Kristopher Dreww proudly admitted to being at the Capitol that day before he later told local media that he feared for his life and his job. The FBI later raided his home.