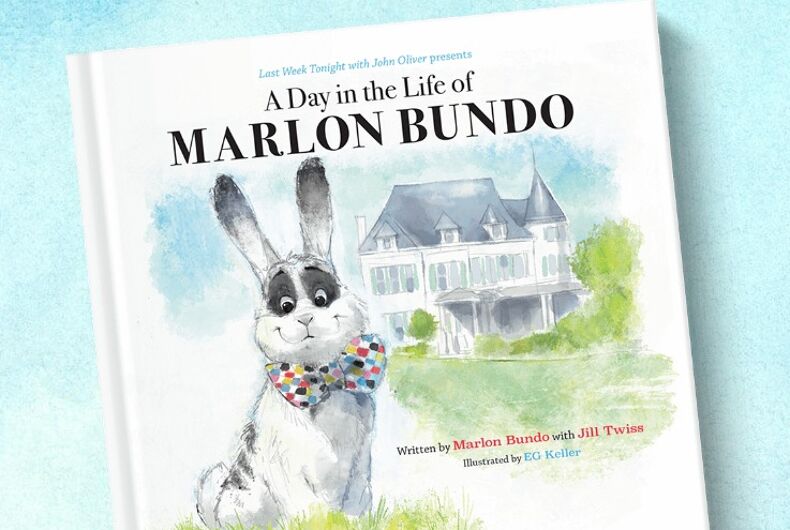 "A Day in the Life of Marlon Bundo"Photo: Screenshot

Marlon Bundo, the Pence family’s pet rabbit who rose to superstardom as the subject of multiple children’s books — one of which championed LGBTQ rights — has died.

Charlotte Pence, daughter of the anti-LGBTQ former Vice President Mike Pence and author of one of the books staring the bunny, announced the bunny’s death on Instagram, writing that “he taught me how to always try to be kind first and never stop making an effort to get along.”

Charlotte said she originally found Marlon Bundo on Craigslist for a student film and never imagined “he’d bring such joy to people all over the world.”

Marlon Bundo first came to the public’s attention in 2018 when Charlotte and her mother, former second lady Karen Pence, released a children’s book entitled “Marlon Bundo’s A Day in the Life of the Vice President.”

In response, Last Week Tonight host John Oliver devoted a segment on his show to dissecting Mike Pence’s long history of promoting discrimination against LGBTQ people, mentioning Pence’s support for conversion therapy, his opposition to LGBT people in the military, and his bill to create a religious exemption to anti-discrimination laws as Indiana’s governor.

Oliver ended the segment by announcing a parody of the “Marlon Bundo” book in which the bunny is gay.

Oliver’s book – A Day in the Life of Marlon Bundo, written by Oliver’s staff member, Jill Twiss – is about Marlon’s love for another boy bunny, Wesley. But after they fall in love, a stink bug who looks a lot like Pence tells them, “Boy bunnies don’t marry boy bunnies.”

The audiobook has an all-star cast, including Jim Parsons, Jesse Tyler Ferguson, John Lithgow, and RuPaul. Proceeds from the book sales went to the Trevor Project and AIDS United.

While meant to troll Pence, Oliver’s version of the book stands on its own as an adorable, age-appropriate children’s book. After he announced its publication, his sales blew the Pence family book out of the water.

Even Charlotte herself bought a copy.

“It doesn’t have to be divisive,” Charlotte said at the time. “I think that everybody can come together over Marlon.”

Charlotte emphasized her support for those charities and said she understood that criticism of her father is “what freedom looks like,” but didn’t say if she disagreed with his positions on LGBTQ issues.

Of course, not everyone was so enamored. Some parents in the Seminole County, Florida elementary school district filed complaints against a first-grade teacher at Pinecrest Elementary School who read A Day in the Life of Marlon Bundo to her class.

And in 2018, A Day in the Life of Marlon Bundo made the American Library Association’s Top Ten Most Challenged Books list. Books are challenged when someone requests that they be removed from a library, school, or university. Oliver’s book was the second-most challenged book of the year.

Nevertheless, the book’s popularity earned it a place in the growing canon of children’s literature with pro-LGBTQ themes and forever cemented Marlon Bundo as an LGBTQ icon.