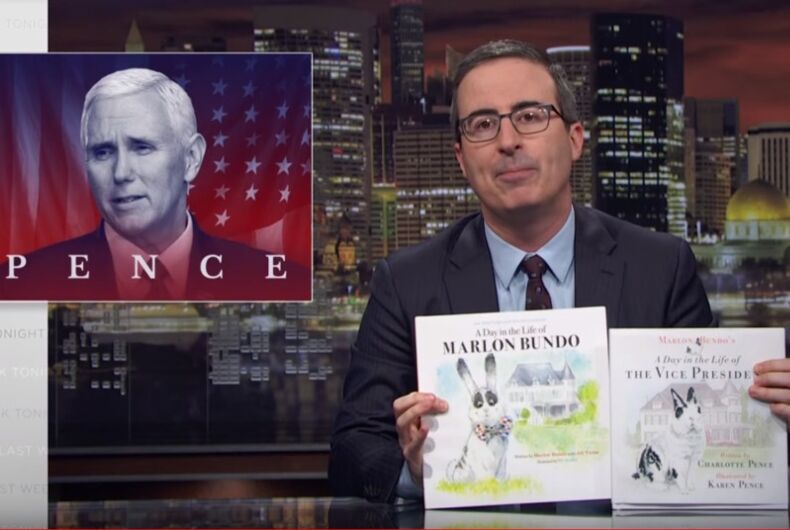 John Oliver holds up his book, alongside the one he's spoofing, by Karen and Charlotte Pence Photo: Screenshot/HBO

As we reported yesterday, John Oliver trolled Mike Pence and family by spoofing the children’s book they wrote about their pet rabbit, Marlon Bundo, with one of his own. The main difference being in Oliver’s version, the bunny is gay, and has to fight for his right to marry the other boy rabbit he loves.

What could possibly make this simultaneously amusing and sweet story even better?

Oliver’s version is blowing the Pence family book out of the water in sales!

A Day in the Life of Marlon Bundo, produced by the team at Last Week Tonight, and written by Jill Twiss and illustrated by E. G. Keller, is currently #1 on Amazon’s bestseller list, knocking James Comey’s A Higher Loyalty down to the #2 spot. Not only that, the audiobook version is also at #1, with characters voiced by Jim Parsons,‎ Jesse Tyler Ferguson, Jeff Garlin, Ellie Kemper,‎ John Lithgow,‎ Jack McBrayer,‎ and RuPaul.

The book upon which it is based, written by Charlotte Pence and illustrated by Karen Pence, A Day in the Life of the Vice President, is currently at the #4 spot on the Amazon bestseller list.

In the spoof, Marlon falls in love with Wesley, and while most of the animals are happy for them, a stink bug (voiced by John Lithgow for the audiobook) who wants to prevent them from getting married because he opposes same-sex marriage.

The book was revealed at the end of a long segment where Oliver highlighted Pence’s anti-LGBTQ record, including his support for conversion therapy, his opposition to LGBTQ people in the military, and his bill to create a religious exemption to the law while the governor of Indiana.

Oliver also noted that one of the stops on the A Day in the Life of the Vice President book tour is at Focus on the Family, an anti-LGBTQ Christian conservative organization listed as a hate group by the Southern Poverty Law Center. It is upset over that detail that helped inspire Oliver to have his gay rabbit spoof written.

In addition to providing great fodder for laughing at Pence, the book has a deeper purpose, fitting into the growing canon of children’s literature with pro-LGBTQ themes. Books like the one penned by Twiss for Last Week Tonight can help children gain a better understanding and acceptance of others, or, should they discover as they grow up that they are themselves LGBTQ, to better understand and accept themselves.

Plus, proceeds from the book will go to the Trevor Project and AIDS United.