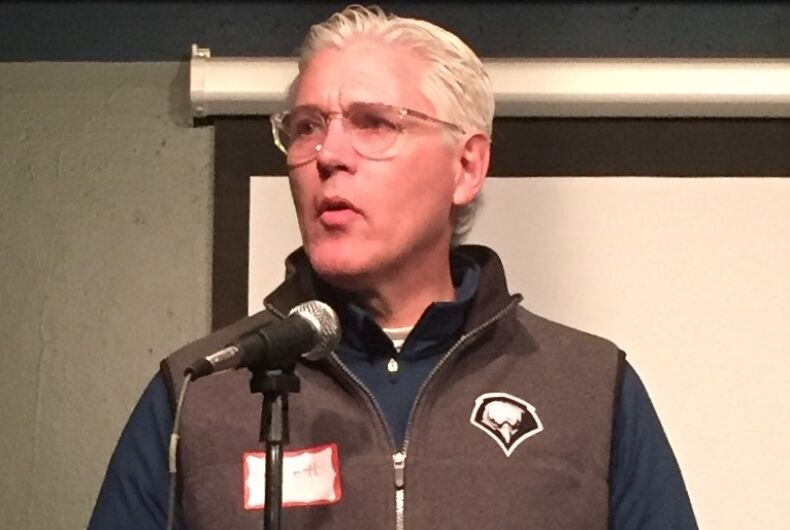 Everett Piper, the president of Oklahoma Wesleyan University (OKWU), wrote a column in the Washington Times that instructed readers to think of ISIS every time they saw the letters “LGBTQ.”

The point of the column is that Piper does not want to have conversations with people who disagree with him, an unexpected position for an academic to take.

If you’re still not feeling a bit unstable on this slippery slope, I recommend this simple exercise: Go to any article in any magazine or website that argues for “conversations” about sexual morality and simply replace the acronym of the day with another set of letters.

For example, every time you see LGBTQ in an article, simply replace those letters with ISIS. Change nothing else. Do this throughout the entire column in question.

In doing this, something will quickly become quite obvious. Sentences will emerge such as these: “Love is love and ISIS has the right to love who they want to love.” “The ISIS community simply wants to be accepted and affirmed.” “What right does anyone have to refuse to bake a cake for an ISIS wedding?”

As such absurdities jump off the page, hopefully it becomes clear how absolutely ridiculous our culture’s game of sexual politics has become.

Indeed. Replacing words with other, unrelated words does result in absurdities. This is the idea behind Mad Libs.

Piper brings up Nazis and the KKK later in his column. He doesn’t really say what they have in common with LGBTQ people other than that he doesn’t like any of the groups.

One is not defined by his desire to engage in aberrant sex any more than one is defined by a desire to persecute Jews or burn crosses. In both cases, because we are human beings and not animals, we are simply supposed to not do it.

“Piper does not seem to grasp the difference between a college and a church,” wrote American History professor John Fae, who works at Messiah College, a Christian school in Pennsylvania. “He is afraid of certain questions. Fear should never be the spirit that defines a college or university, even a Christian one.”

In 2016, OKWU joined a lawsuit challenging Obama Administration guidelines on campus sexual assault. The lawsuit itself was procedural, but Piper’s objections were more substantive.

“We also refuse to accept any government intrusion that would require OKWU to teach the antithesis of our Christian beliefs concerning sexual behavior,” he wrote in a press release.

While it is possible to discuss the merits of the guidelines, Everett did not explain what part of fighting sexual assault was the “antithesis” of “Christian beliefs.”