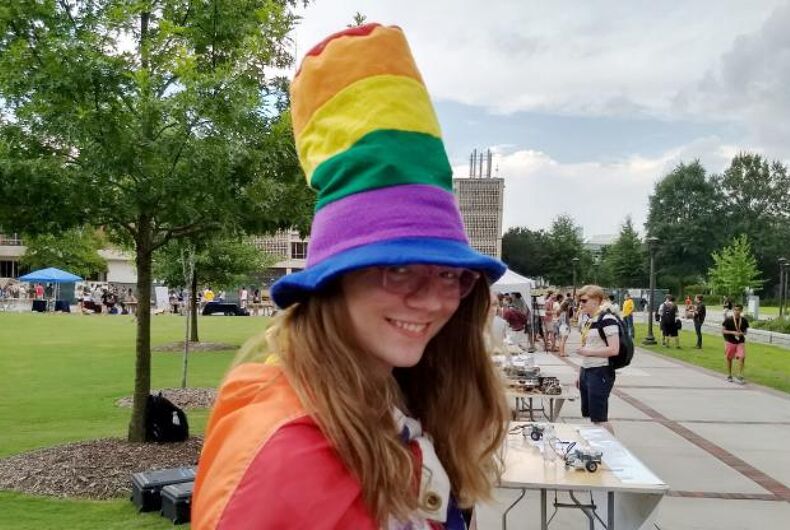 Scout Schultz was shot and killed by a police officer while they were holding a pocket knife.

The family of a non-binary Georgia Tech student who was killed by campus police while experiencing a mental health episode will receive $1 million from the school in a settlement after suing for wrongful death.

Scout Schultz was shot by campus police in 2017 while residents of their dorm watched and recorded the killing on camera. While at least four officers surrounded Schultz, they were armed with “a flip-open utility tool that would likely include a small blade,” according to CNN. The blade was not out of the pocket knife during the confrontation.

Police alleged they were called to the scene based on reports that someone was wandering campus armed with a gun and a knife. In the video recorded from a dorm window, it does not appear that Schultz has a gun and no knife is visible.

The video shows police officers commanding Schultz to “drop the knife.” They continue to walk toward the police officer exhorting the cop to “Shoot me!” When another officer started talking to Schultz, they moved in that direction, taking approximately three steps before being shot in the heart and killed.

Schultz was suicidal, barefoot, and in obvious mental distress. In the wake of their death, students rioted on campus, torching a police cruiser after busting out the windshield and chanting slogans like “This is not okay. Justice now!”

The officer who shot Shultz, Tyler Beck, had only been on the force for a year and had not received crisis intervention training. In the lawsuit, Schultz’s family accused Beck of using deadly force, despite the fact that the other officers on the scene were working to de-escalate the situation, according to Project Q Atlanta. Additionally, at the time, Georgia Tech officers did not carry alternatives to nonlethal weapons, like pepper spray or tasers.

Beck was fired from Georgia Tech but was never charged for killing Shultz.

In a statement following the announcement of the settlement, Georgia Tech expressed its plans to continue improving its mental health resources.

“The recent settlement between Scout’s family and the Georgia Department of Administrative Services gives us a moment to reflect again on ways Georgia Tech can better support all members of the campus community,” the statement said. “While we’ve significantly increased campus mental health resources and well-being programs over the last four years, we are reminded today of the importance of continued work in this area.”

According to the Atlanta Journal-Constitution, Georgia Tech has made significant changes since Shultz’s death, including requiring officers to undergo 40 hours of crisis intervention training. Officers also now carry tasers in addition to guns.

After receiving $1 million in donations toward the school’s LGBTQIA Resource Center, Georgia Tech has also worked to expand the center’s mental health and wellness programming.

L. Chris Stewart, an attorney for the Schultz family, hopes other schools will take note of Georgia Tech’s changes.

“We are hopeful that the university’s example of caring effort will be replicated nationwide,” Stewart said. “Students have let us know the LGBTQIA community is often overlooked and we hope these positive changes continue and that Scout’s life will stand for change.”