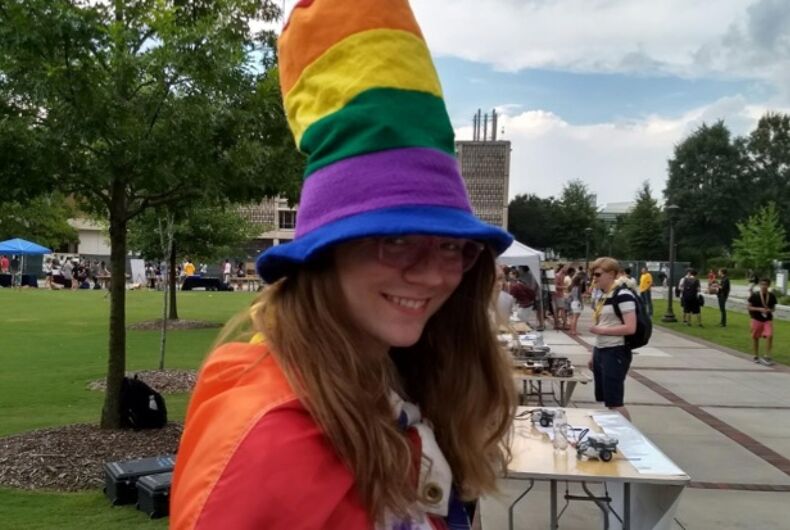 Scout Schultz, a non-binary student at Georgia Tech, was shot by campus police while residents of their dorm watched and recorded the killing on camera. While at least four officers surrounded Schultz, who was armed with “a flip-open utility tool that would likely include a small blade” according to CNN. The blade was not out of the pocket knife during the confrontation.

Police allege they were called to the scene based on reports that someone was wandering campus armed with a gun and a knife. In the video recorded from a dorm window, it is obvious that Schultz does not have a gun and no knife is visible.

The video shows police officers commanding Schultz to “drop the knife.” They continue to walk toward the police officer exhorting the cop to “Shoot me!” When another officer started talking to Schultz, they moved in that direction, taking approximately three steps before being shot in the heart and killed.

Schultz’s mother says they were an outstanding student with a history of depression. A progressive activist, she assumed they had died protesting injustice and was shocked to hear that they’d been killed in yet another police shooting. They were the leader of the campus LGBT pride group.

“Why didn’t they use some nonlethal force, like pepper spray or Tasers?” Lynne Schultz asked the Atlanta Journal-Constitution. Georgia Tech officers do not have tasers for some ungodly reason – and the lack of nonlethal alternatives has led to another unnecessary death. Most officers nationwide carry pepper spray for occasions like these.

The Georgia Bureau of Investigation is investigating the shooting, but if history is any lesson, the chances of any officers being disciplined beyond desk duty is slight. The few who have been prosecuted have mostly been let off with a slap on the wrist for killing an unarmed person from a minority group.

If your first thought is to give the police the benefit of the doubt, investigators have continued to use the wrong pronoun for Schultz. The cops didn’t care about Schultz’s life. Why would they care about pronouns?

Had a great time tabling for Pride at FASET today! Always fun to greet the incoming first-years and get a glance at the…

Posted by Pride Alliance at Georgia Tech on Monday, July 17, 2017