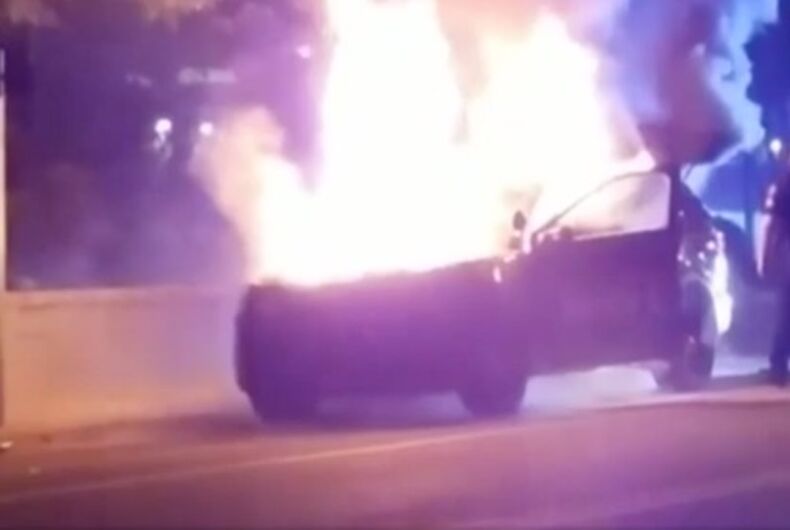 A police car burns after students rioted at Georgia Tech following the execution of an unarmed student.Photo: Justin Yoo/Instagram

Students at Georgia Tech university held a vigil last night following the police shooting of Scout Schultz, a nonbinary leader of the campus LGBT group. While the vigil was peaceful, a smaller group of about 50 people reformed afterward and marched on the campus police station leaving mayhem in their wake.

Students torched a police cruiser after busting out the windshield. Police arrested three individuals and have charged them with inciting a riot and battery of an officer. The officer who shot and killed Schultz was not arrested and charged with murder or manslaughter.

Students chanted slogans like “This is not okay. Justice now!” and unfurled a banner that read “Protect LGBTQ” according to CNN.

Schultz’s parents are also questioning why campus police shot and killed the student. Police originally insisted that they were armed with a knife, but it has now been confirmed that Schultz was carrying a pocket knife with a small blade that wasn’t out of the handle. Schultz was suicidal, barefoot, and in obvious mental distress when an officer shot them in the heart because they took three slow steps toward the officer.

Schultz was killed outside their dorm while other students recorded the execution on their phones and yelled at officers not to shoot. Campus police do not carry tasers and did not attempt to use any nonlethal methods of subduing the nonviolent victim.

The school offered “prayers” to Schultz’s family and said they are “deeply saddened by the events on campus.” They did not say they would seek justice for the killing, only that they would “offer opportunities for dialogue.”

We are deeply saddened by the events on campus last night. Here is a message to the Georgia Tech community from Dr. Peterson. pic.twitter.com/xvbfNIEVMY

The police shooting of an LGBT student activist at a US college is raising questions about lethal force. http://bbc.in/2xNtZVo

Demi Lovato will open up about her sexuality in upcoming documentary