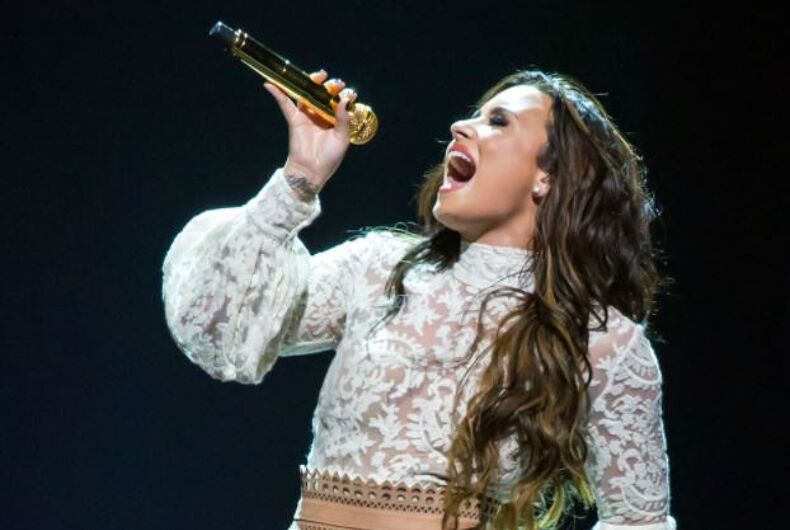 Demi Lovato has said she will open up about her sexuality in her upcoming YouTube documentary Demi Lovato: Simply Complicated, coming out on October 12.

The topic has long been the source of speculation, fueled in no small part by her song “Cool for the Summer,” about bi-curiosity.

Lovato was also recently seen holding hands with, and wrapping her arm around, DJ Lauren Abedini at Disneyland, leading to speculation they were dating.

The pop star was asked yet again about her sexual orientation during an interview with Pride Source, and as she has in the past, she declined the invitation to answer the question directly.

When asked why she wouldn’t reveal her orientation when she is such an outspoken supporter of the LGBTQ community, she gave a blunt response:

I just feel like everyone’s always looking for a headline and they always want their magazine or TV show or whatever to be the one to break what my sexuality is. I feel like it’s irrelevant to what my music is all about. I stand up for the things that I believe in and the things that I’m passionate about, but I like to keep my personal life as private as possible when it comes to dating and sexuality and all that stuff just because it has nothing to do with my music. Unfortunately, we live in a world where everyone is trying to get that soundbite and I am purposefully not giving the soundbite. Watch my documentary.

She added that the documentary will “answer a lot of questions.”

When asked if she was referring to her sexuality, she said yes.

“Because if ever I want to talk about it, I want it to be on my own terms,” she explained.

You can watch the trailer for the documentary below.

Why is only one of a gay couple’s twin sons considered a United States citizen?