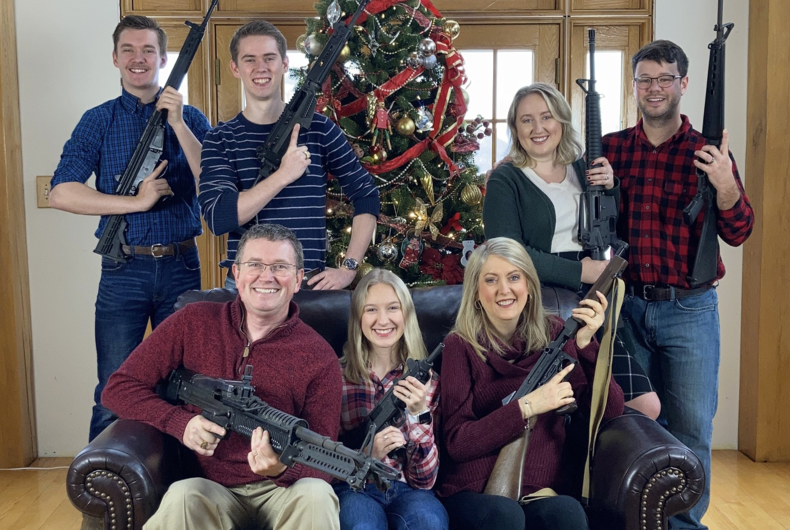 A Republican Congressman is getting criticized for his “deranged” Christmas family picture that he shared on social media just day after a school shooting.

Related: Another school shooting happened while you weren’t looking

The picture shows him, his wife, and his children smiling maniacally and holding rifles.

Criticism was rampant on Twitter, partly because of Massey’s timing, sharing the picture just days after the Oxford High School shooting in Michigan that left four students dead and 7 injured. 15-year-old shooter Ethan Crumbley has been arrested.

Crumbley’s parents Jennifer and James Crumbley have also been arrested and charged with four counts of involuntary manslaughter for allegedly giving Ethan access to the weapon. Prosecutors believe that they had a very lax attitude about guns and made them “a family hobby.”

“LOL I’m not mad at you. You have to learn not to get caught,” Jennifer Crumbley allegedly texted her son after he was caught searching for ammo on his phone at school the day before the shooting.

This is disgusting.
It would be under any circumstance but knowing what just transpired in Michigan, it is especially so.
There are parents in MI who won’t have their kids with them this Christmas.
Why?
Because a classmate gunned them down at school.
Take this down.
You monster.

Last week, 4 beautiful young kids had no idea that they were celebrating their last Thanksgiving with their families.

My question for you is: What part of your family picture is “ Merry” & has anything to do with Christmas & birth of the original, anti violence man on earth?

Maybe you can invite them to join you for Christmas dinner if they get out on bail. Seems you have an obsession in common. pic.twitter.com/WIK9IIBKr9

I’m pretty sure that’s what Ethan Crumbly said. Maybe you should talk to the parents of these murdered children and the victims who survived to see if they think this is cute.

What exactly is the point of this? How do you not understand how disturbing this is? We’re mourning the deaths of 4 precious kids who went to school only to be murdered by a classmate in yet another School Massacre & you post this?

This is so sad. And what’s worse is you have no idea how sad it is.

Alexa, show me everything that's wrong with America in one photo

Great message there, right after the Crumbleys attitude about guns resulted in 4 kids being gunned down and 7 more in the hospital.

You realize Ethan was caught "looking for ammo", and his mom joked about it, right? RIGHT?

How to show the world you don't care about life.

you cannot underestimate how much ordinary people think this tweet is so far off the scale of decency. Evangelical America is in a dark dark place.

“That’s my kind of Christmas card!” she said in response to Massie’s picture.