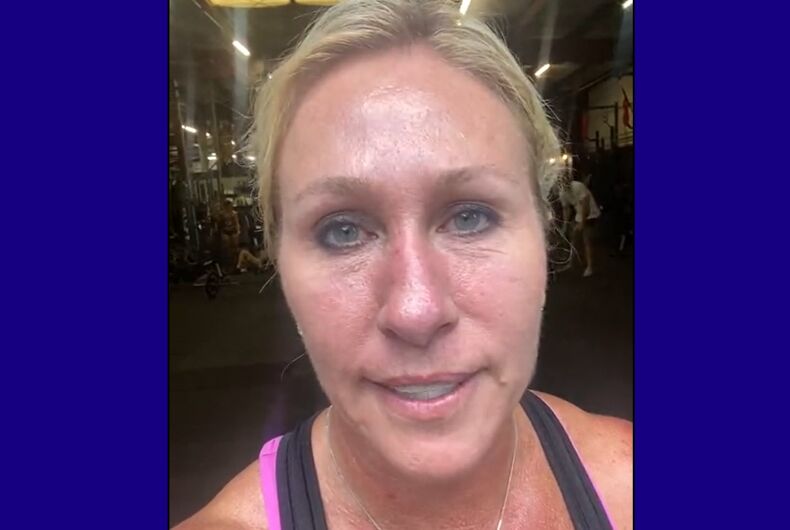 The House of Representatives worked late into the night and early this morning, resulting in a vote passing bipartisan legislation championed by President Joe Biden that will allow for historic investments in the amount of hundreds of billions of dollars into infrastructure across the country over the coming years.

Much of the country is celebrating and recognizing the bill’s passage as a victory for all Americans, but especially President Joe Biden and Democrats. At least one person is unhappy about it, though — Rep. Marjorie Taylor Greene (R-GA), who has immediately denounced the few Republicans that supported the bill for supporting Biden’s “communist takeover.”

After spending her evening initially tweeting about FOX News‘ special docuseries about January 6, Greene shifted her focus to the ongoing vote on the bill, tweeting, “Republicans who hand over their voting card to Nancy Pelosi to pass Biden’s Communist takeover of America will feel the anger of the GOP voter.”

Republicans who hand over their voting card to Nancy Pelosi to pass Biden’s Communist takeover of America will feel the anger of the GOP voter.

Her apparent warning to her Republican colleagues not to vote along with the majority of the Democratic Party did not have much weight. Greene tweeted bitterly as the number of GOP Congressmembers voting for the bill increased.

“8 Traitors,” she said first. Then, “Make it the unlucky 13,” she added in a subsequent tweet with the hashtag, “#Traitors.”

Your voters will send you the same message they sent Democrats on Tuesday.

Greene then went on a tirade, attacking the Republicans who, in her view, “Just voted to help Biden screw America.”

She invoked the fact that six Progressive Democrats voted against the bill, for largely procedural reasons, to support her argument that the “fake” infrastructure plan is part of Biden’s “Communist takeover.”

Greene then included the names and Washington office phone numbers for each of the Republican Congressmembers that voted in favor of the bill.

Here are the “Republicans” that just voted to help Biden screw America.

But 6 Democrats did more than these 13 traitor Republicans to stop Biden’s fake Infrastructure bill by voting NO.

They have more balls than these R’s. pic.twitter.com/2LRJAlu9Pr

These are the 13 “Republicans” who handed over their voting cards to Nancy Pelosi to pass Joe Biden’s Communist takeover of America via so-called infrastructure:

Despite Greene’s complaints, much of the rest of the civilized world was more than elated by the news that the bill, officially known as the Infrastructure Investment and Jobs Act, had finally passed the House, months after the bill previously passed the Senate in a much larger vote.

President Biden, who was scheduled to travel to his weekend home in Delaware, stayed in Washington last evening but did not speak publicly.

Naomi Biden, Biden’s granddaughter, summed it up in a tweet: “this is a Big Fucking Deal.”

I’ll say it: this is a Big Fucking Deal

Biden, who will address the country today, did issue a statement last night, and he and the White House had somewhat more eloquent words than Naomi’s.

“Tonight, we took a monumental step forward as a nation,” Biden stated. “The United States House of Representatives passed the Infrastructure Investment and Jobs Act, a once-in-generation bipartisan infrastructure bill that will create millions of jobs, turn the climate crisis into an opportunity, and put us on a path to win the economic competition for the 21st Century.”

He added, “I’m also proud that a rule was voted on that will allow for passage of my Build Back Better Act in the House of Representatives the week of November 15th,” referring to an accompanying proposal that would allow much of Biden’s agenda to go into effect. “The Build Back Better Act will be a once-in-a-generation investment in our people… I look forward to signing both of these bills into law.

“Generations from now, people will look back and know this is when America won the economic competition for the 21st Century,” he concluded. Biden will sign the infrastructure bill into law in the coming days.

Here are some of the other remarks by some White House staff and the President’s Cabinet members.

Proof that delivering for the American people is worth all the painful sausage making. Clean drinking water for kids, broadband access, electric vehicles, biggest investment in public transit. It’s happening. And more to come.

Results are on the way.

American leadership and democracy at work.

With bipartisan support, @POTUS will sign into law the Infrastructure Investment and Jobs Act – the most significant investment in American infrastructure in my lifetime.

It’s an extraordinary moment – and our team at @USDOT stands ready to get to work delivering these resources to create jobs and improve everyday life in communities across America.

.@POTUS came into office promising to find consensus in Washington so he can better the lives of Americans in all places in our country. With the House’s passage of the Bipartisan #Infrastructure Deal, he has delivered.

DNC Chair Jaime Harrison: “Make no mistake, today’s vote was made possible by the leadership of President Biden and Democrats who are delivering on their promise to build consensus and show that the government can work for all Americans.”

Several members of Congress that supported the bill in both the House and the Senate explained why they voted in favor of it and what their constituents can expect to come from its passing.

The House just passed a historic #BipartisanInfrastructureBill that includes:

Next up: The Build Back Better Act

The House just passed the bipartisan infrastructure bill, which will soon be signed by President Biden! This is a huge win for Hoosiers and will help keep Indiana the crossroads of America. I’ll continue working hard to pass more of the #BuildBackBetter agenda.

With the passage of this bill, we are not only creating millions of new, good-paying union jobs but also bringing America’s roads, bridges, transit, rail, drinking water and wastewater infrastructure into the 21st century.

We just took a major step toward building back better and delivering for our communities.

My statement on the passage of the Bipartisan Infrastructure bill ⬇️ pic.twitter.com/MU52RmffQY

I strongly support President Biden’s Build Back Better agenda. That’s why I voted to pass the bipartisan infrastructure bill.

These are direct investments in our communities.

After all of the jokes about infrastructure week, and after every candidate for the Presidency promised to get infrastructure done, it is worth noting that only President Biden accomplished it.

This is a big deal. The House just passed the historic, bipartisan infrastructure bill.

While the bill passed by a vote of 228 in support to 206 against, nearly along party lines in the narrowly-divided House, six progressive Democrats voted against the bill, which without the 13 votes from Republican members, would have prevented the bill’s passage.

Many of the six members explained that they wanted to vote for the bill at the same time as the Build Back Better plan’s accompanying bill to ensure what they view as vital components to the proposals remain intact. The Build Back Better plan is awaiting scores from the Congressional Budget Office before it is voted on, according to Axios.

They had enough votes to block the infra bill but 13 Rs bucked McCarthy and voted for highways and bridges in their districts.

There is still MUCH more to be done to fully invest in working families, and I will continue fighting for them while ensuring that this new infrastructure funding reaches projects throughout Seattle and across Washington.

Passing #BIF without a real vote on #BuildBackBetter advances fossil fuel subsidies and cuts to environmental protections without the transformative investments my residents and communities need. My full statement here: https://t.co/rVYJ9RlBNv. pic.twitter.com/jEggqmGhQ5

Several of the GOP lawmakers that supported the bill explained the rationale behind their vote as well. Rep. Fred Upton (R-MI) stood solely behind the proposal as well as the Build Back Better plan.

“I regret that this good, bipartisan bill became a political football in recent weeks,” he said.

The Bipartisan Infrastructure Bill is commonsense legislation that will support critical infrastructure projects in MI without raising taxes or increasing the debt. It will help rebuild our highways and harbors, replace lead waterpipes in Benton Harbor and across the country…

I regret that this good, bipartisan bill became a political football in recent weeks. Our country can’t afford this partisan dysfunction any longer. #MI06 #Infrastructure

Other Republicans that supported the bill, while standing behind their vote, spoke out against other aspects of Biden’s agenda and Build Back Better.

My statement on tonight's votes in the House. pic.twitter.com/T6deqceSpS

Still, many others off of Capitol Hill were also excited by the news, and they spoke out largely in celebration of the momentous support garnered by Biden and House Speaker Nancy Pelosi, among others.

IT IS FINALLY INFRASTRUCTURE WEEK!!!

Without Nancy Pelosi, this bill would never have passed. Thanks to her tireless work–fighting back against the GOP even as she battled for the bill, the American people–all of us–are closer to getting desperately needed infrastructure.
Don't you think she deserves our thanks? pic.twitter.com/TTBLzvxbfb

The previous dude talked about it.

Queer teens are less likely to get the health care they need. Here’s how pediatricians can help.