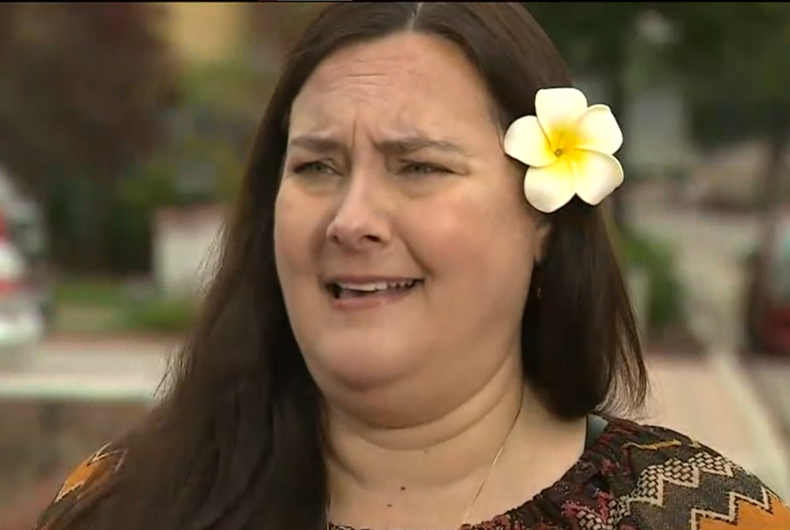 Sarah Silikula is speaking out about the QAnon teacher's lessonPhoto: Screenshot

A middle school history teacher is under fire for a lesson that included saying that Donald Trump is still president, that President Joe Biden’s son had sex with his own niece, and that hospitals are stealing unvaccinated parents’ children.

The Anacapa Middle School teacher in Ventura, California, who has not been identified in the media, was recorded by a student who felt uncomfortable with her long rant on October 18 about various conspiracy theories, which included saying that the 2020 election was rigged in “the state where audits were done.”

Sarah Silikula is the mother of the student who recorded the rant, and she said that her child was “damaged” by the experience.

Parts of the recordings shared by KCAL 9 show that her conspiracy theories are aligned with the QAnon movement, including saying that Biden’s son Hunter was caught with child pornography, which isn’t true.

“Hunter Biden, for example, is doing deals with China and Ukraine where he was funneling in money illegally,” the teacher said. “He also had child pornography on his laptop. He was having sexual intercourse with his own niece.”

She also talked about vaccines.

“If you have a baby at the hospital, they don’t want to give it back if you’re not vaccinated,” she said, even though that’s also untrue. “This is a complete power control threat.”

Silikula said that her son “doesn’t trust his parents now, he thinks we lied to him.”

She said that she contacted the school, which told her that they would conduct an internal investigation.

According to the superintendent of the school district, a different teacher has taken over her son’s class. The district said that it does not condone the teacher’s lesson that day, but they have to follow a progressive disciplinary procedure agreed to with the teachers’ union.

KCAL 9 reports that the teacher is still working at the school and has “accepted responsibility for the error in her judgment.”

Is it okay to travel to homophobic countries?